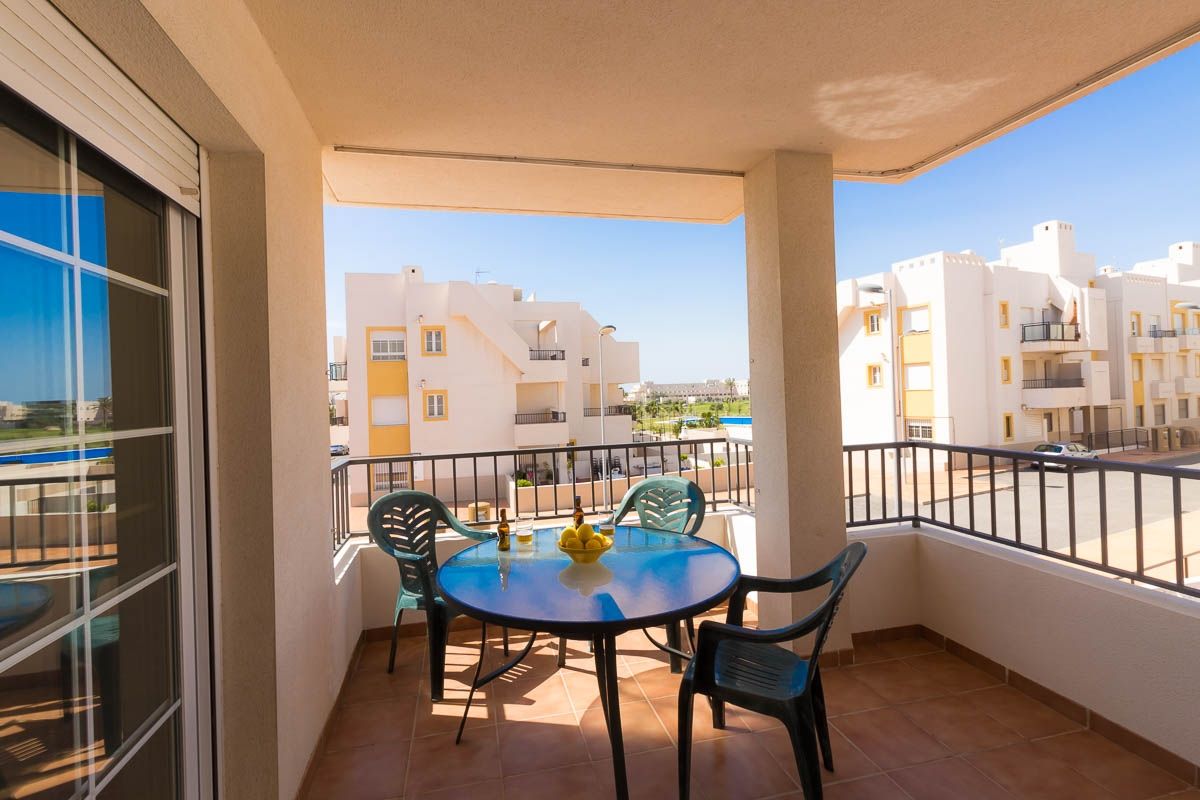 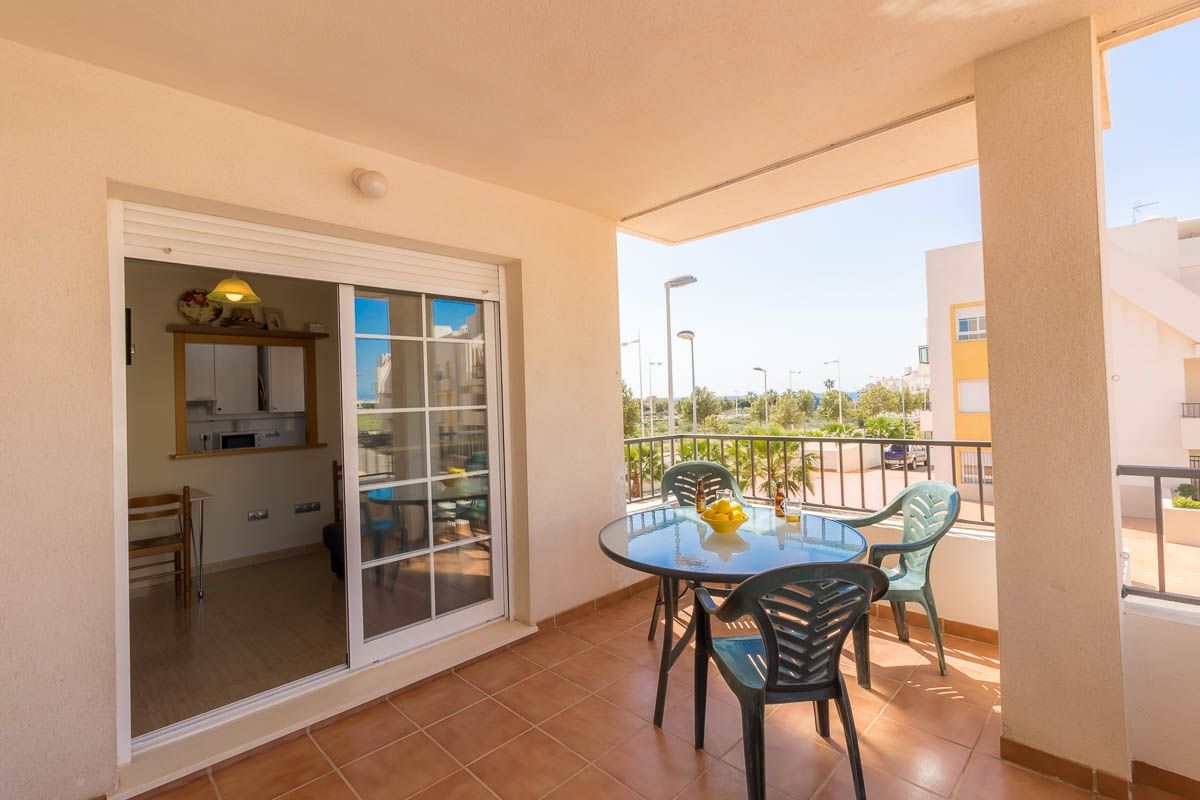 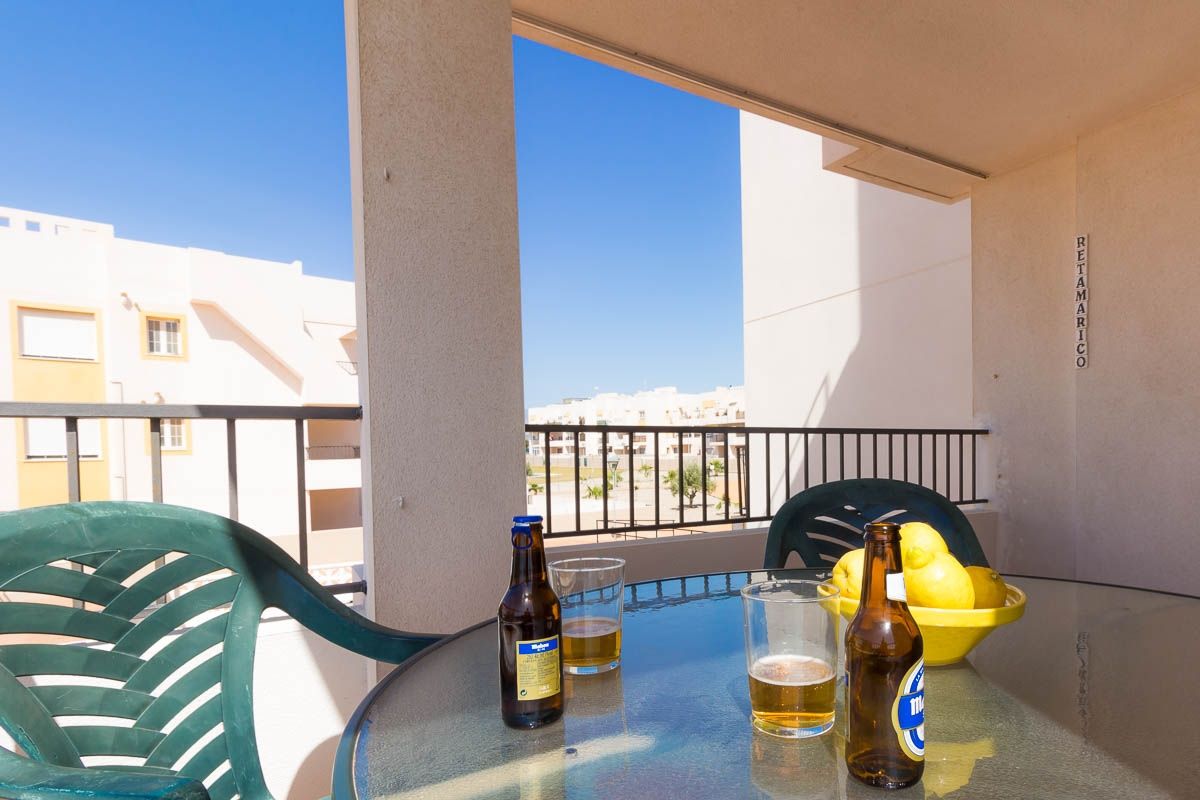 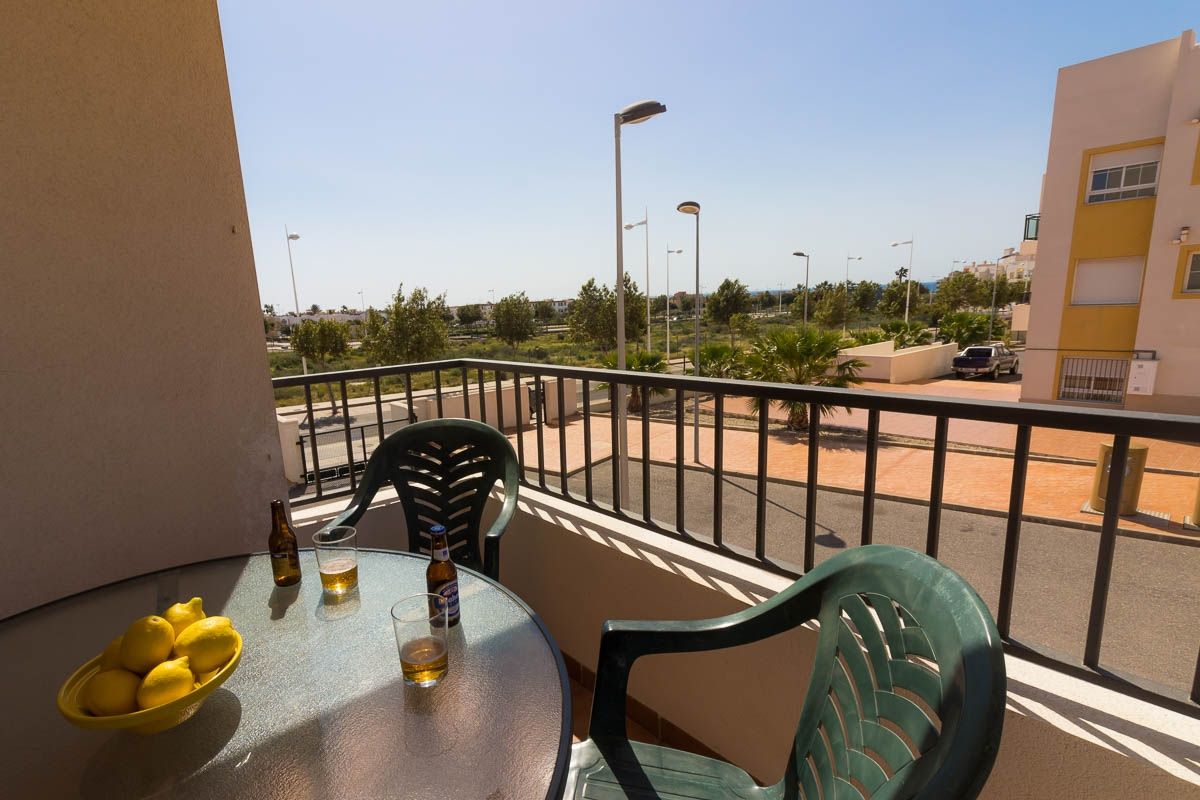 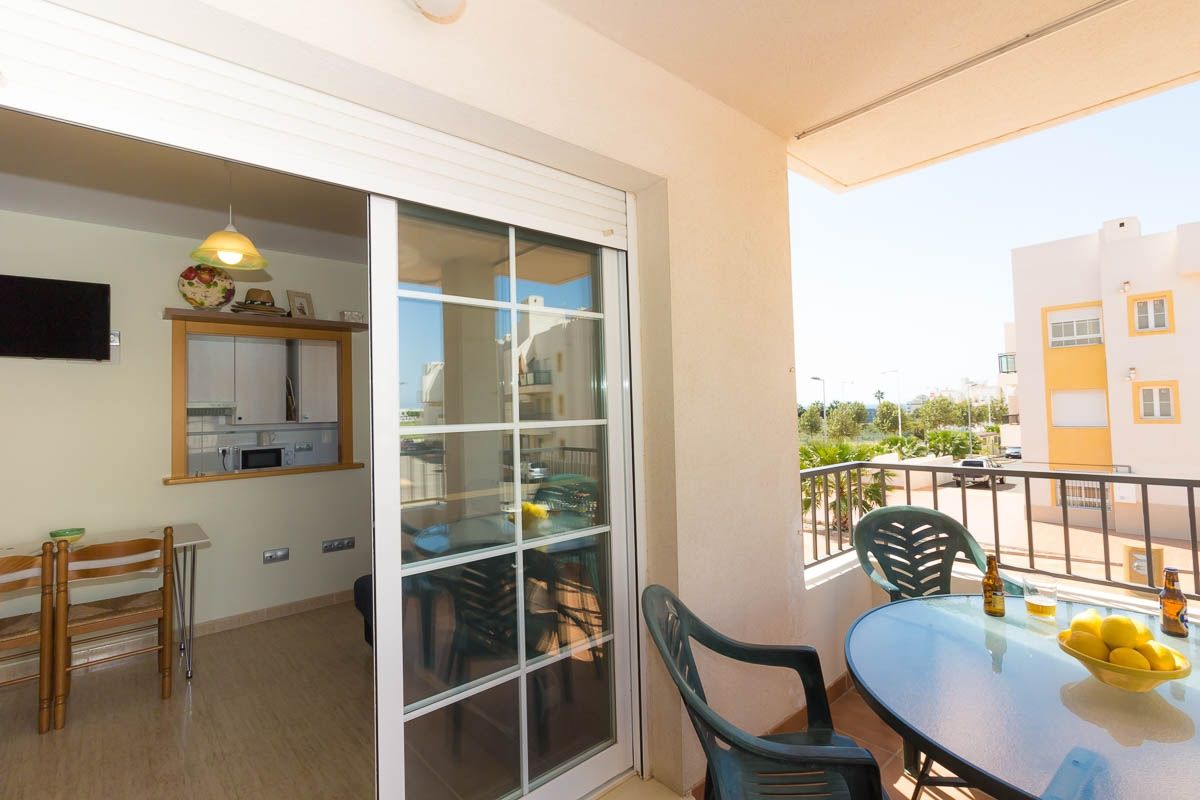 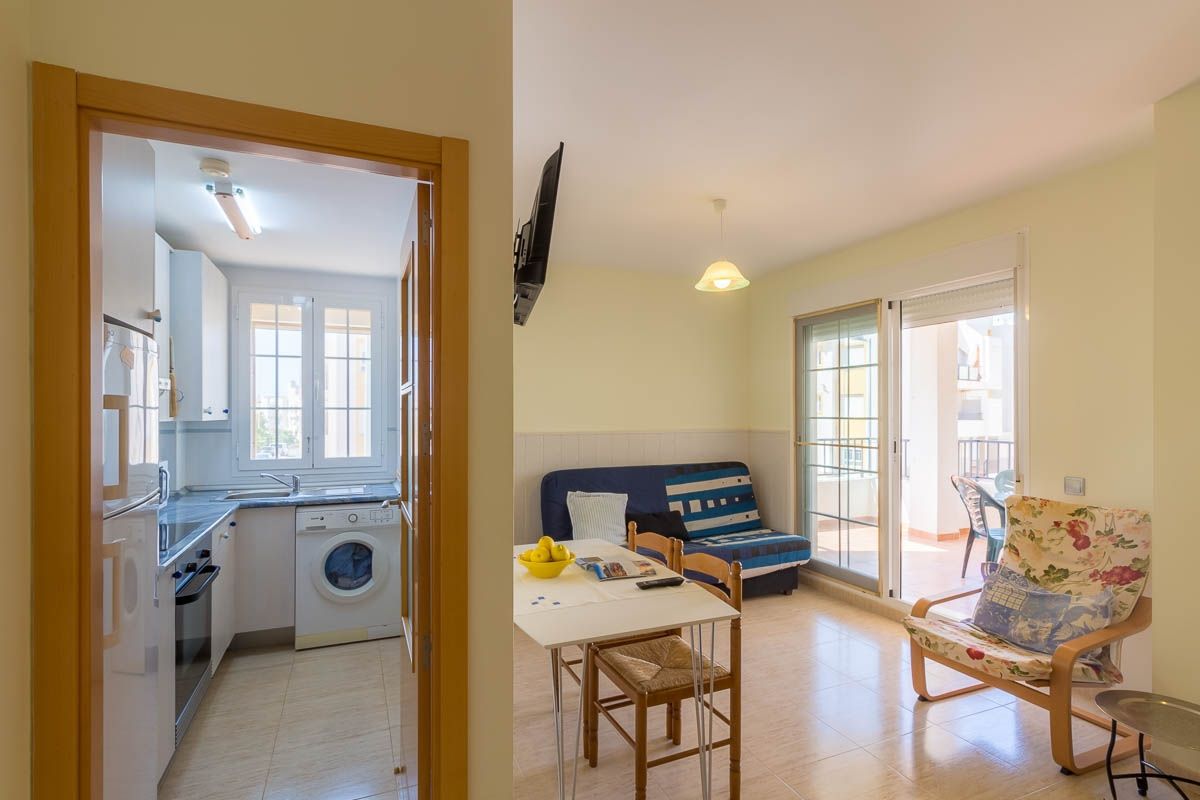 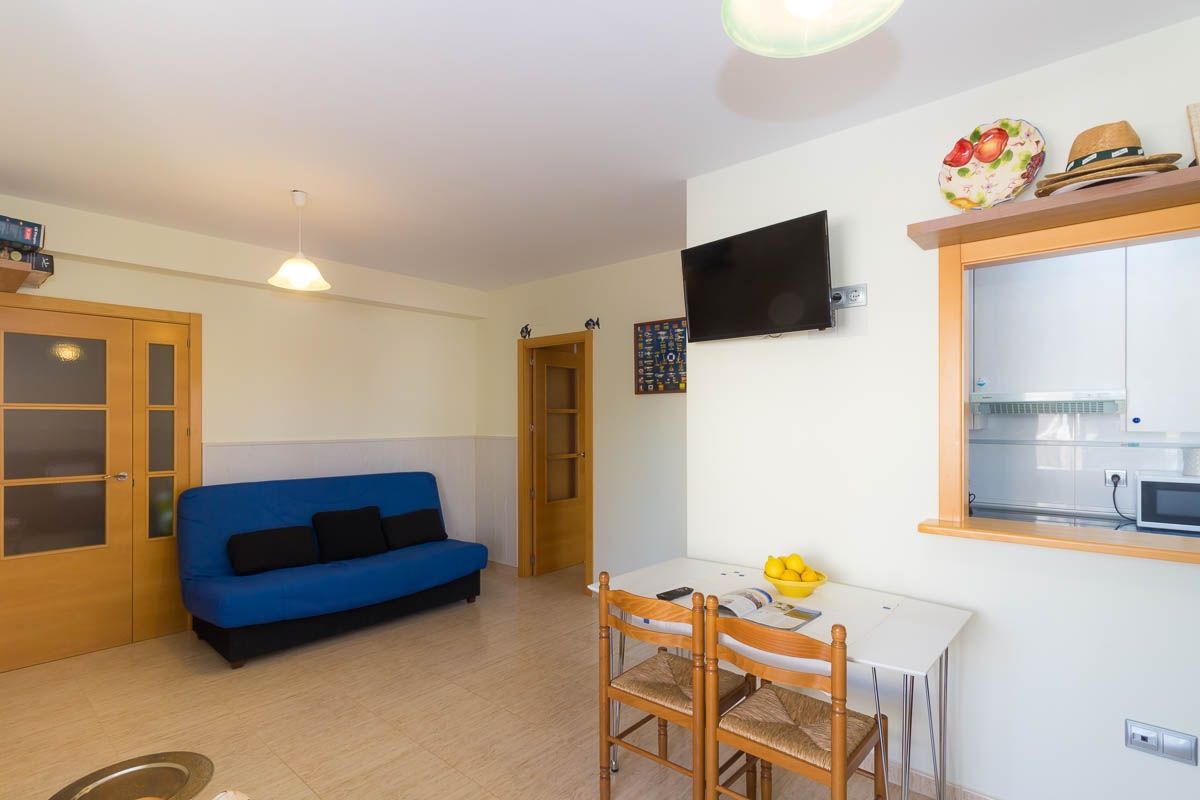 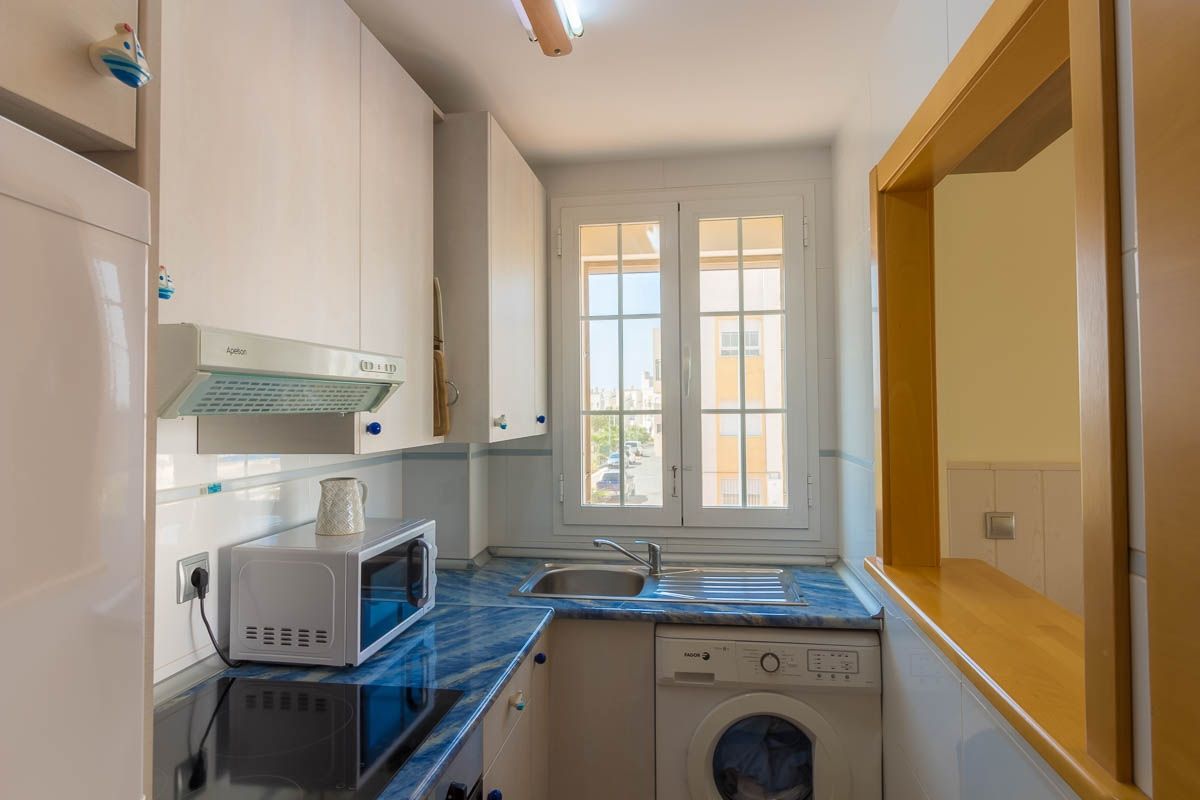 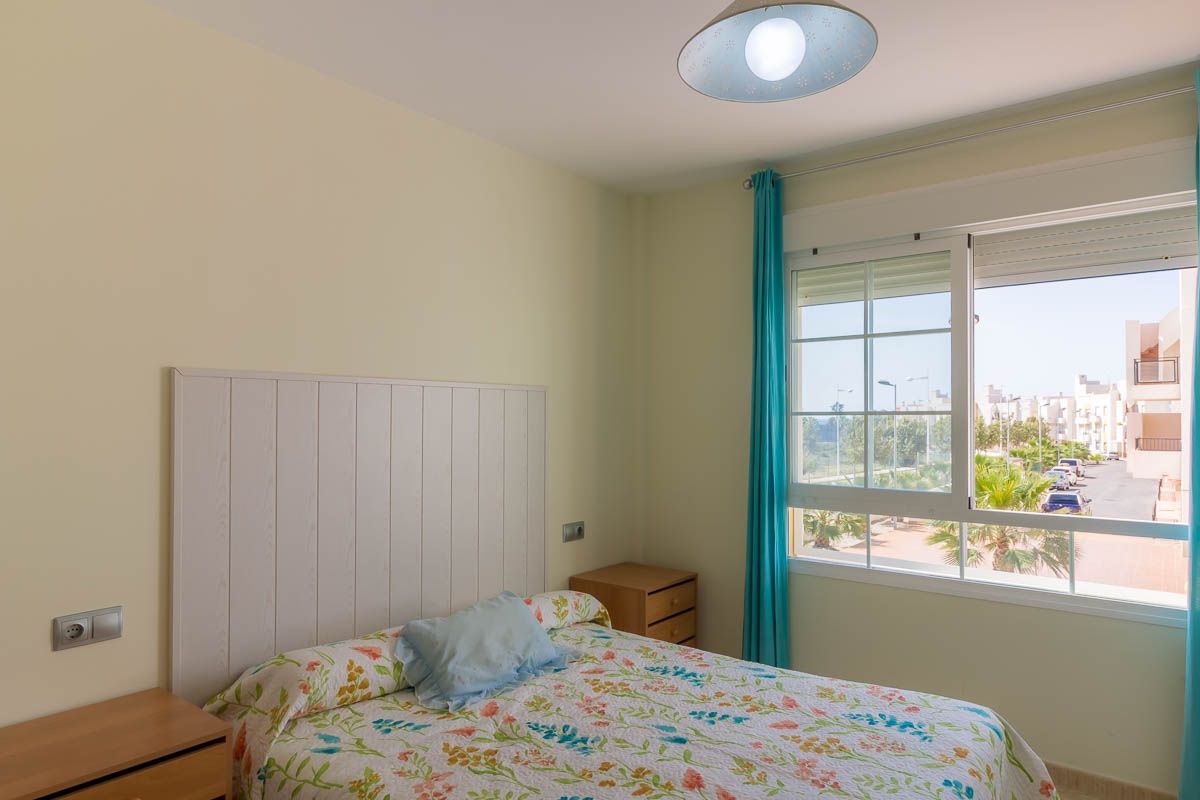 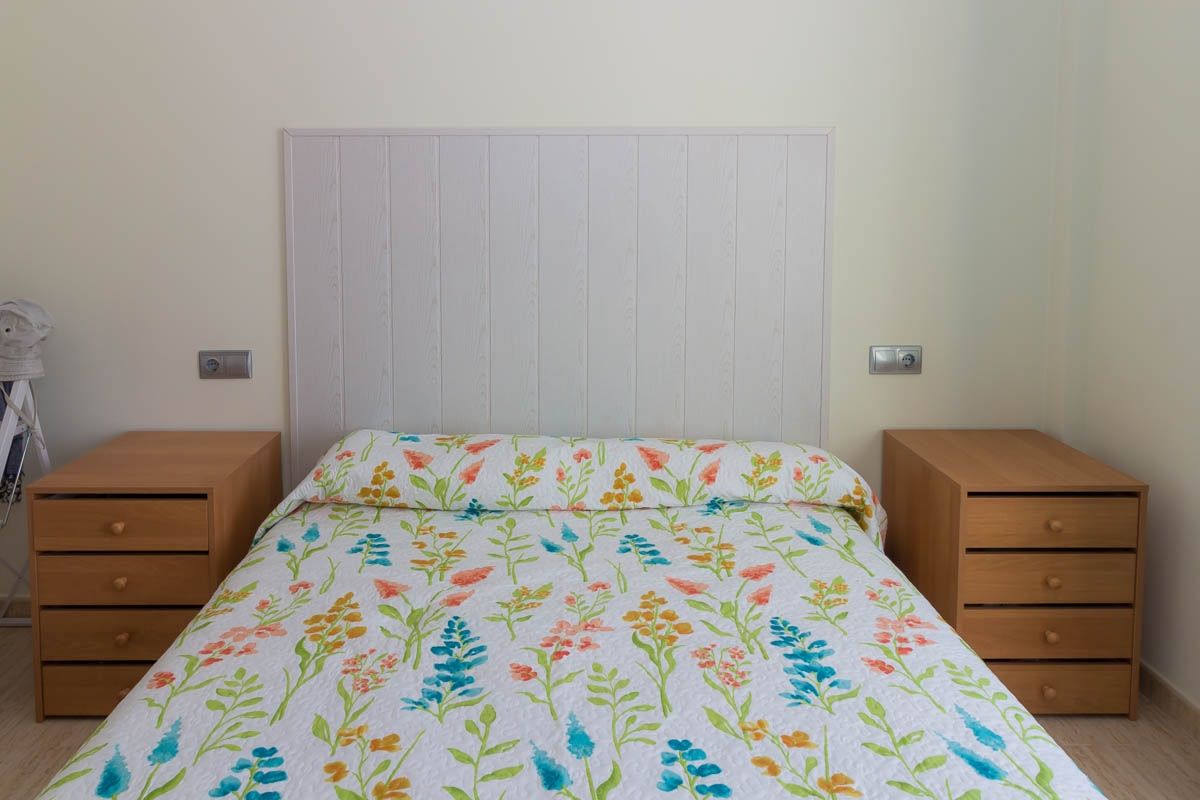 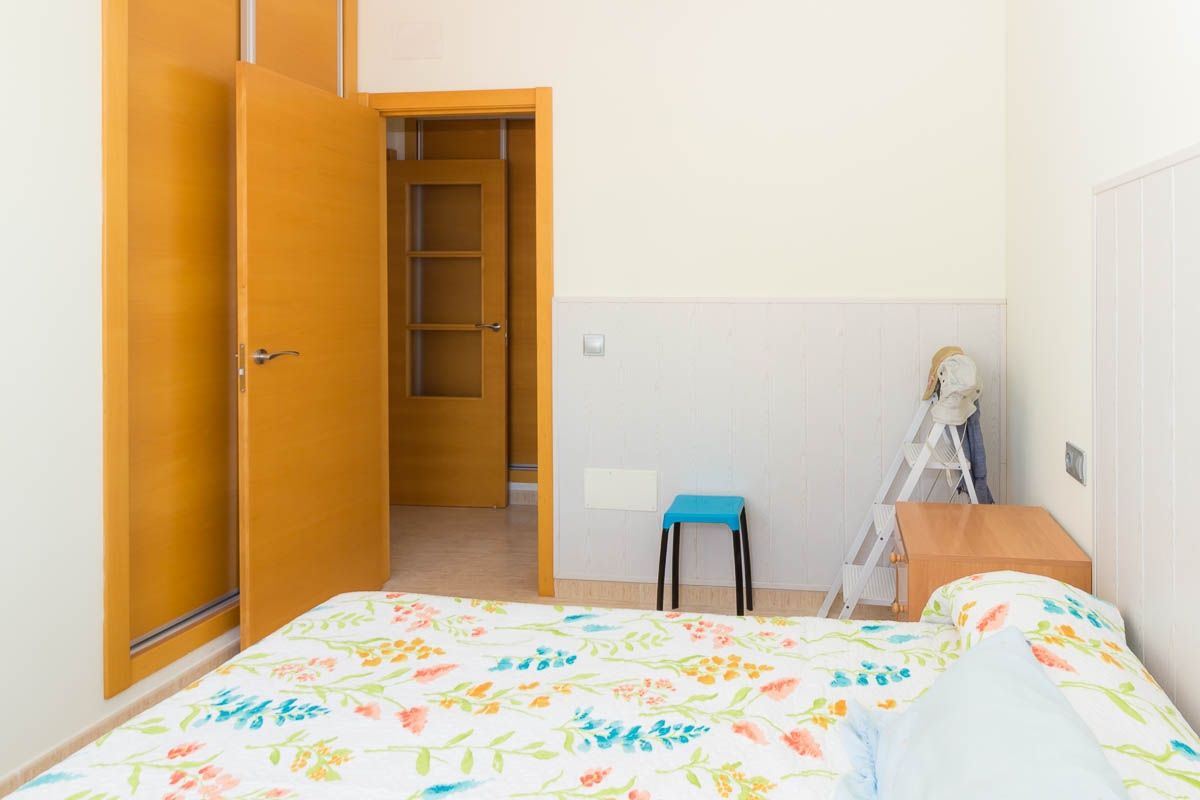 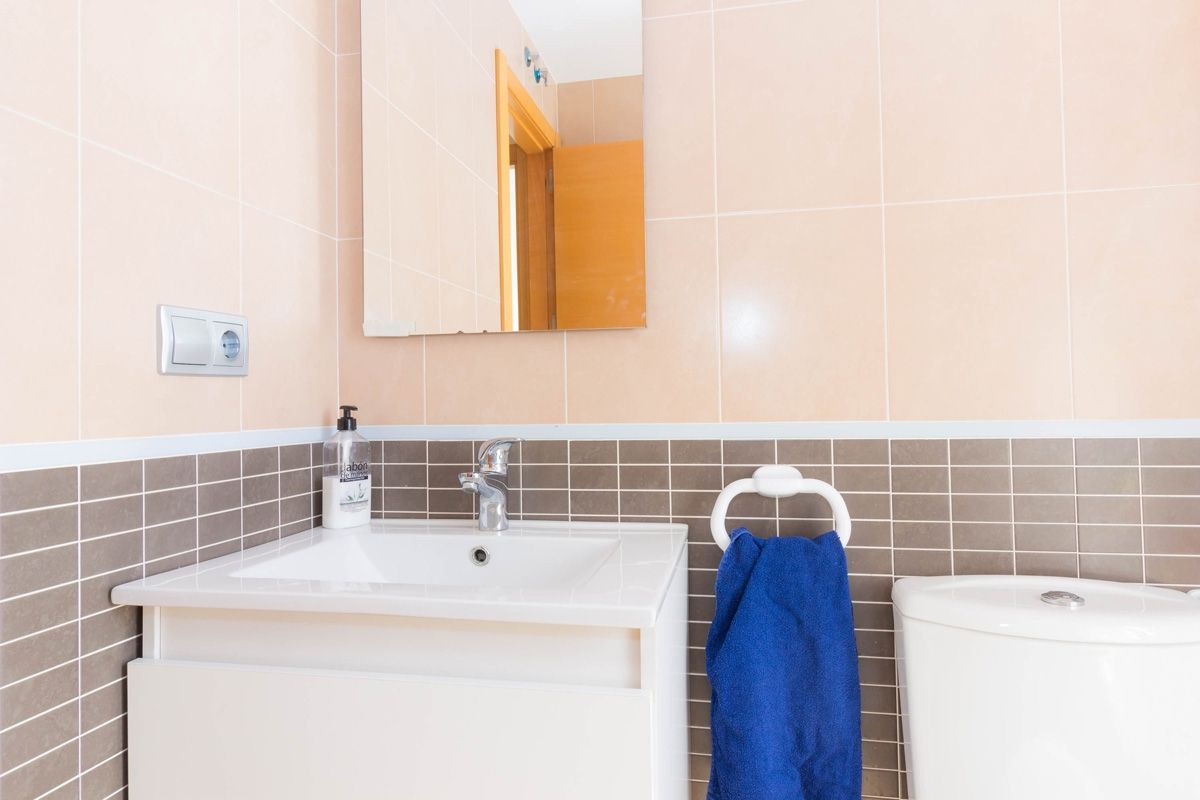 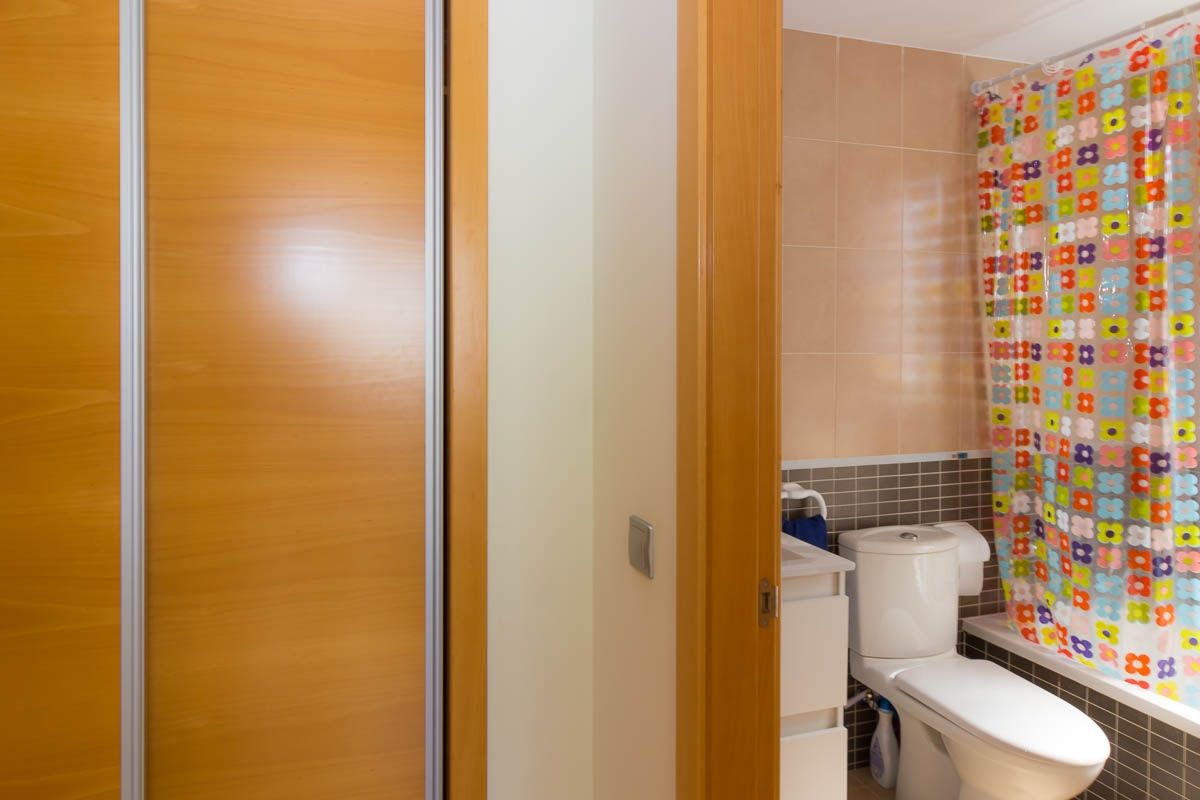 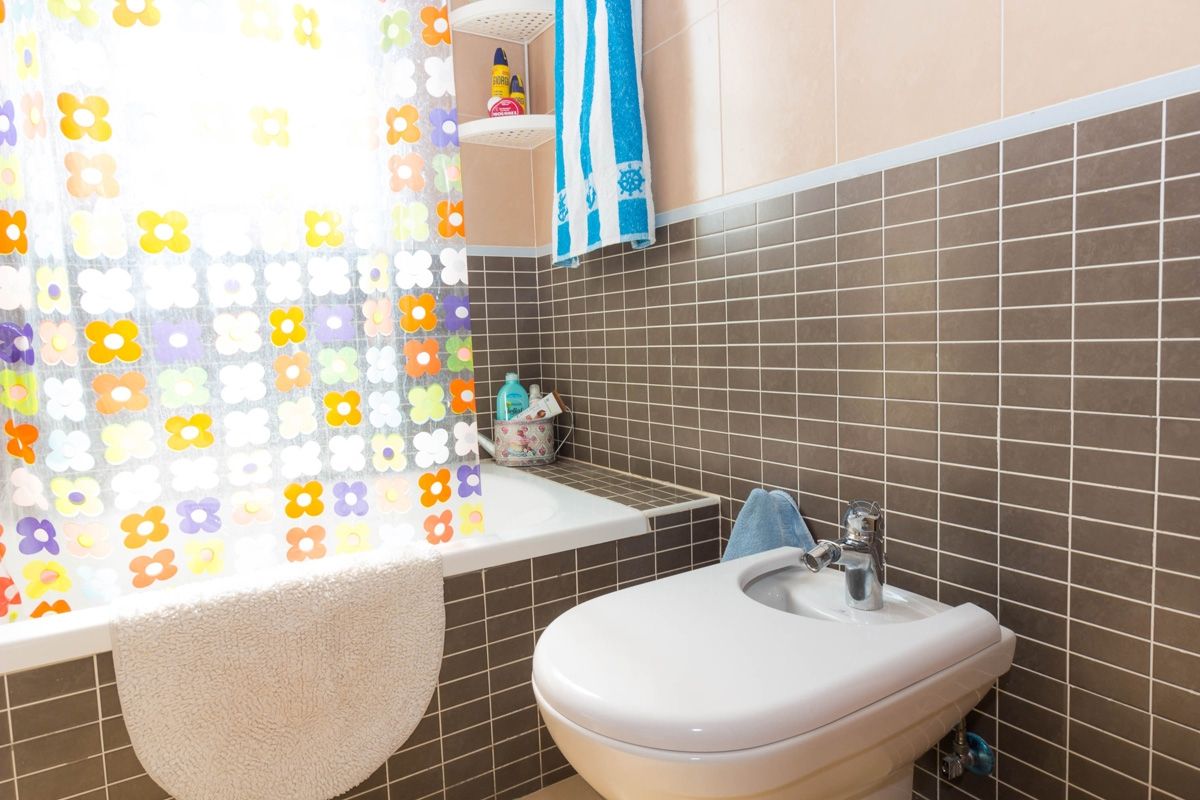 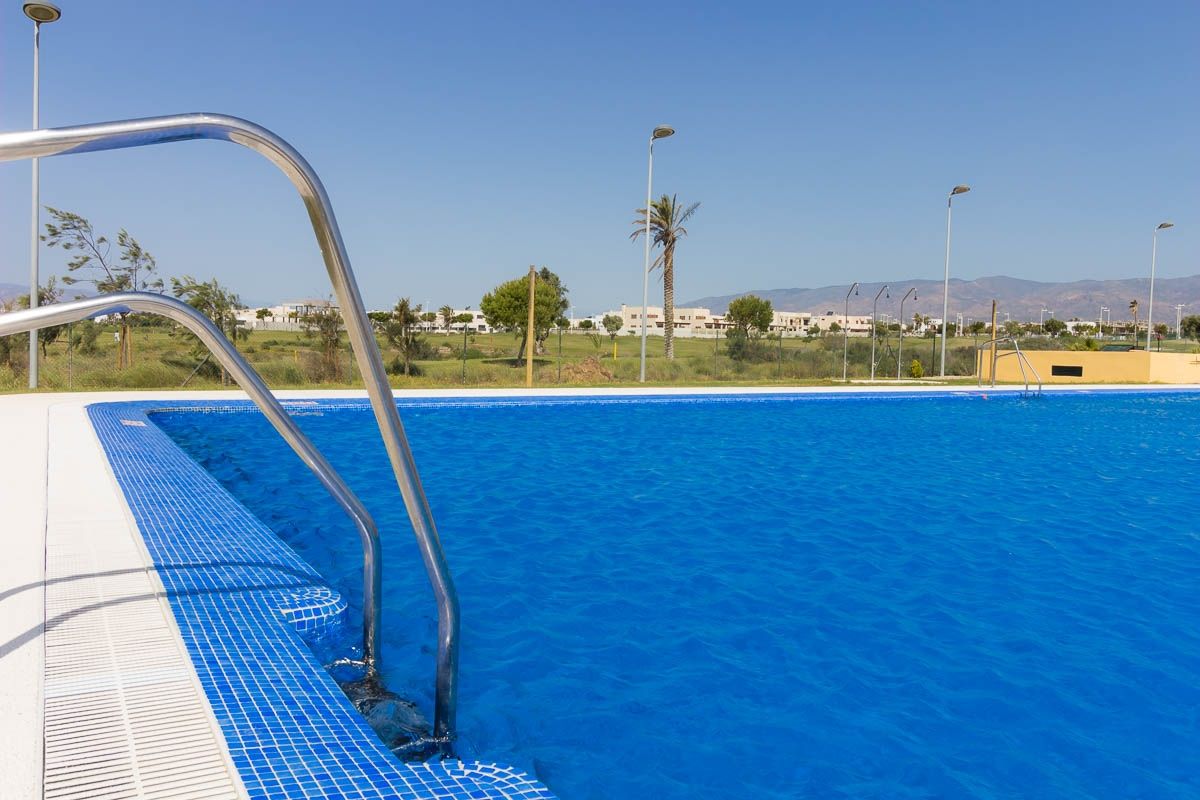 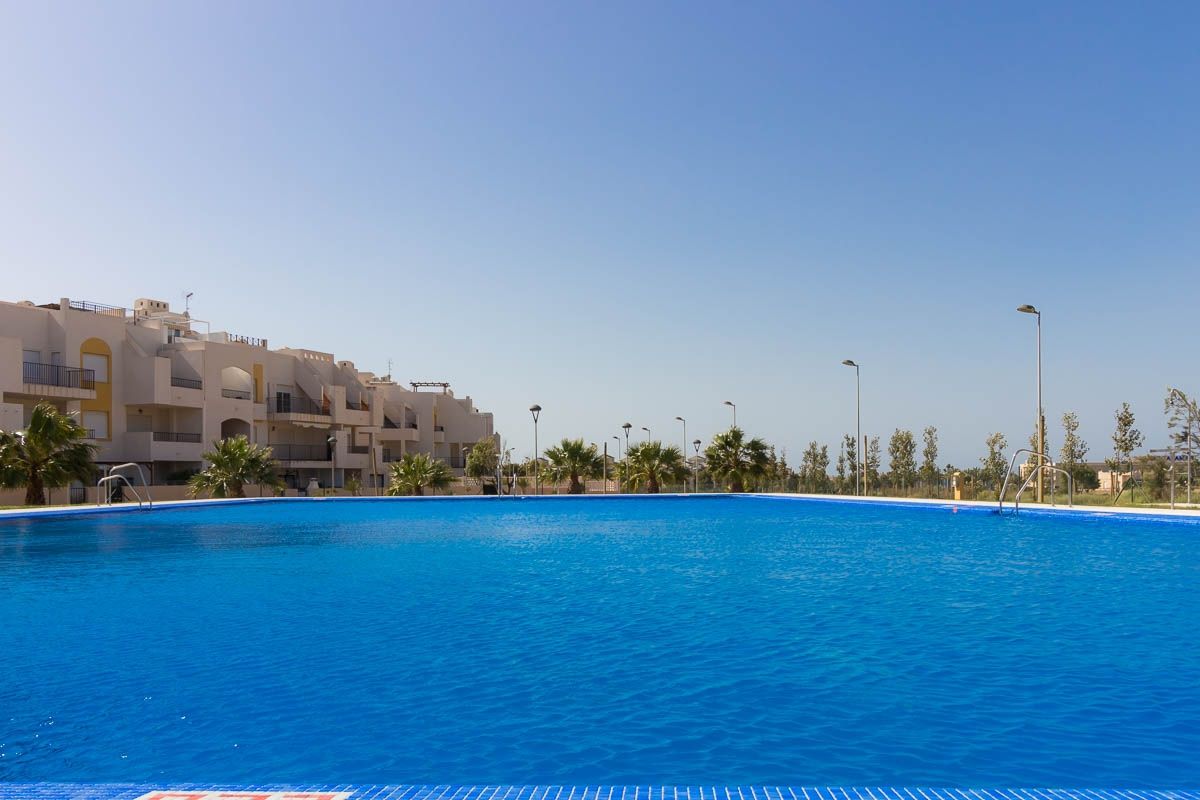 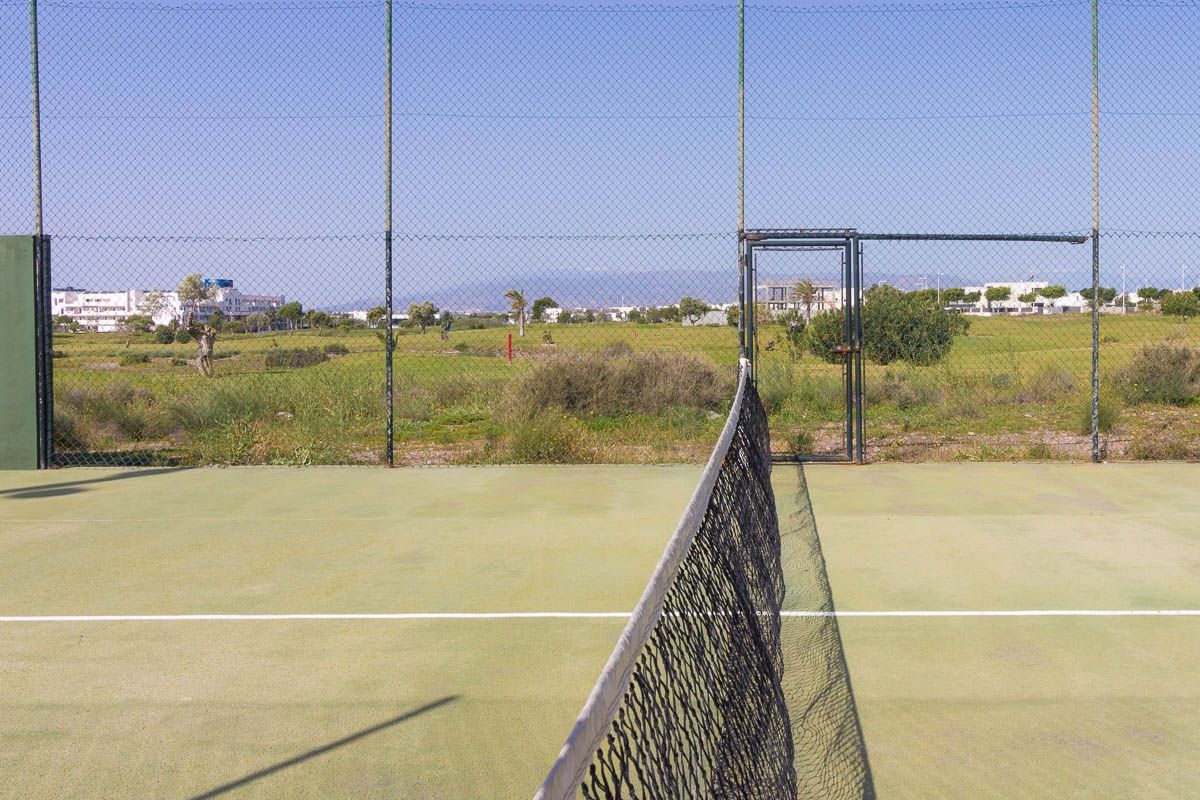 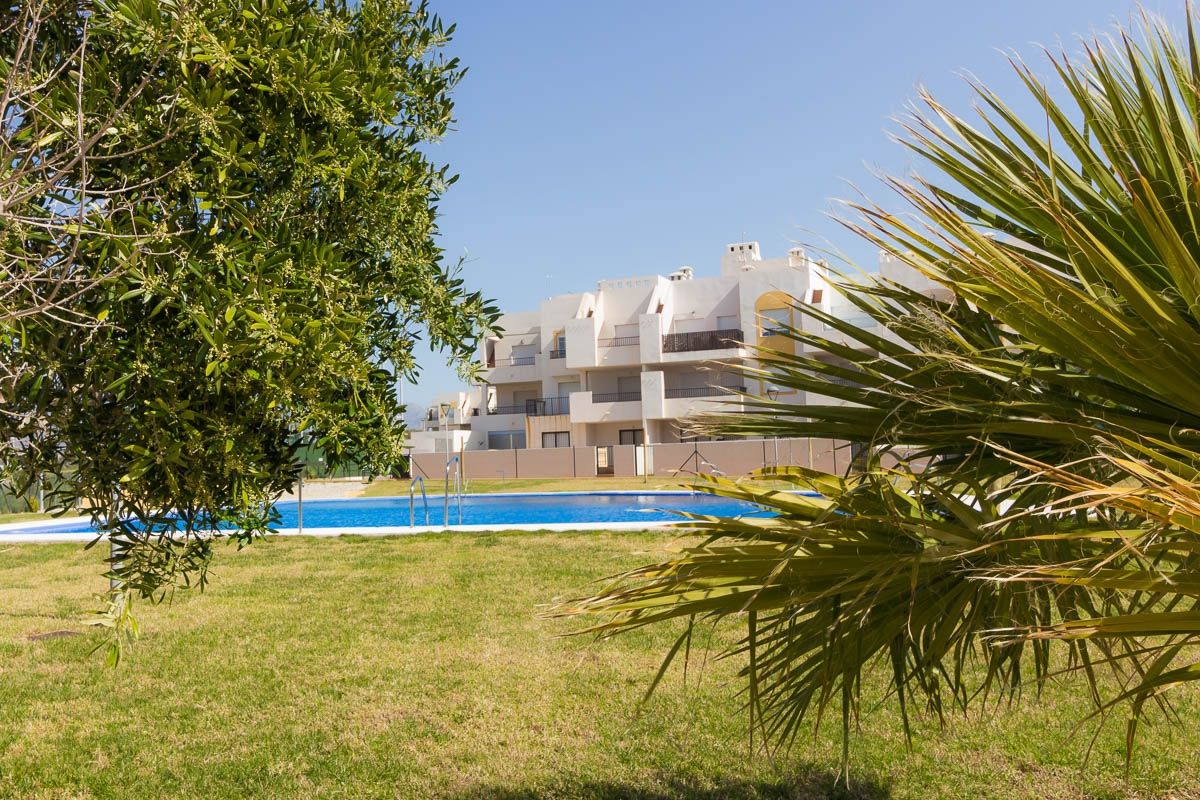 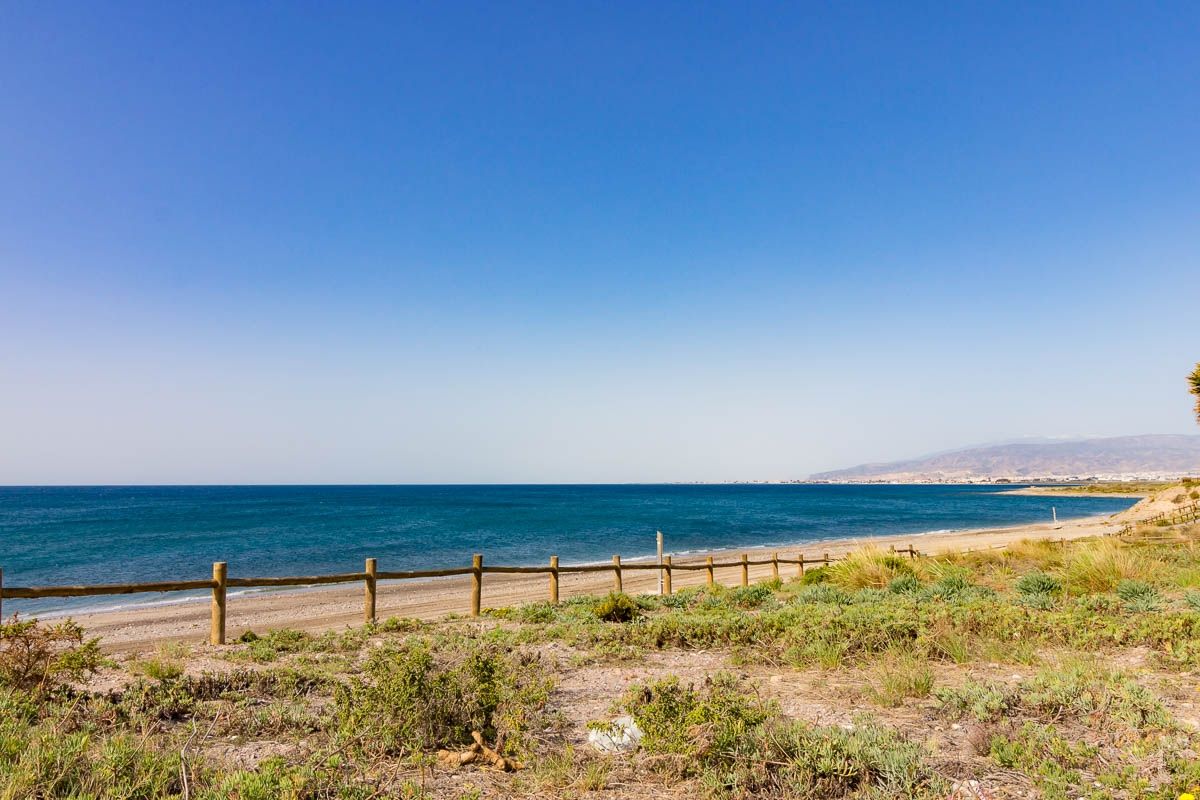 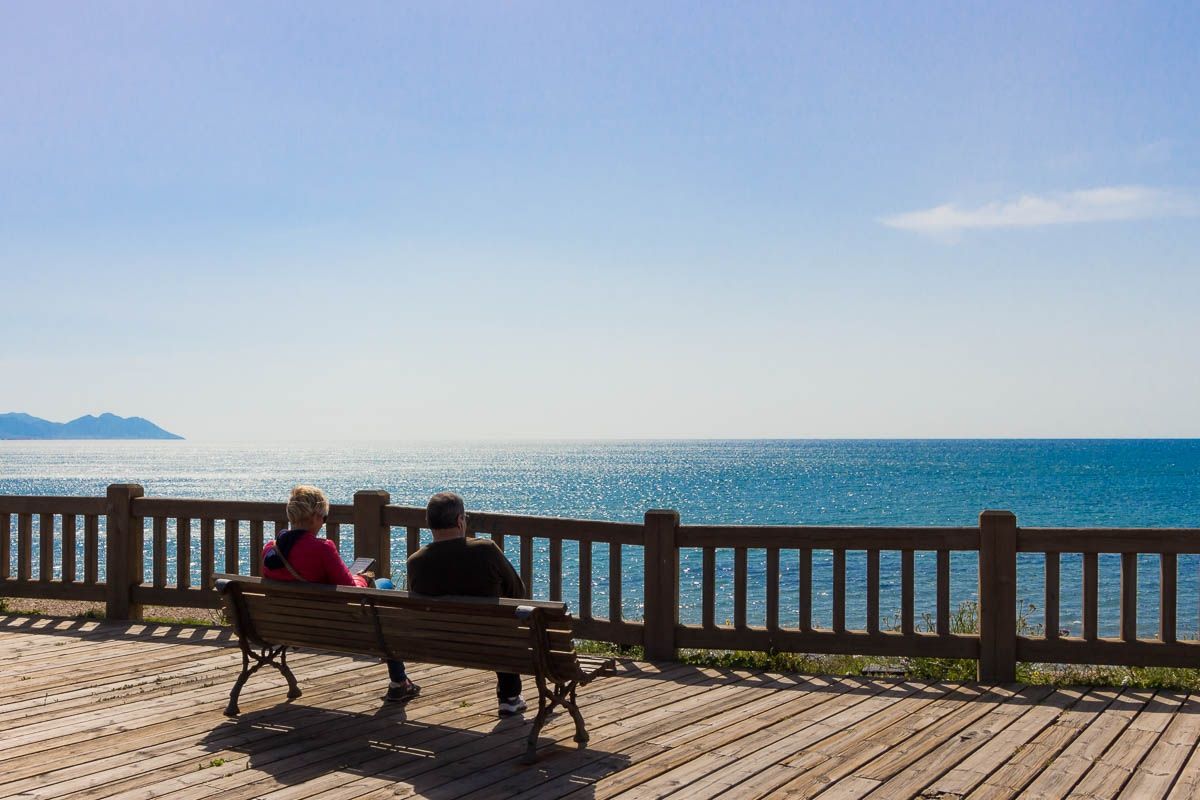 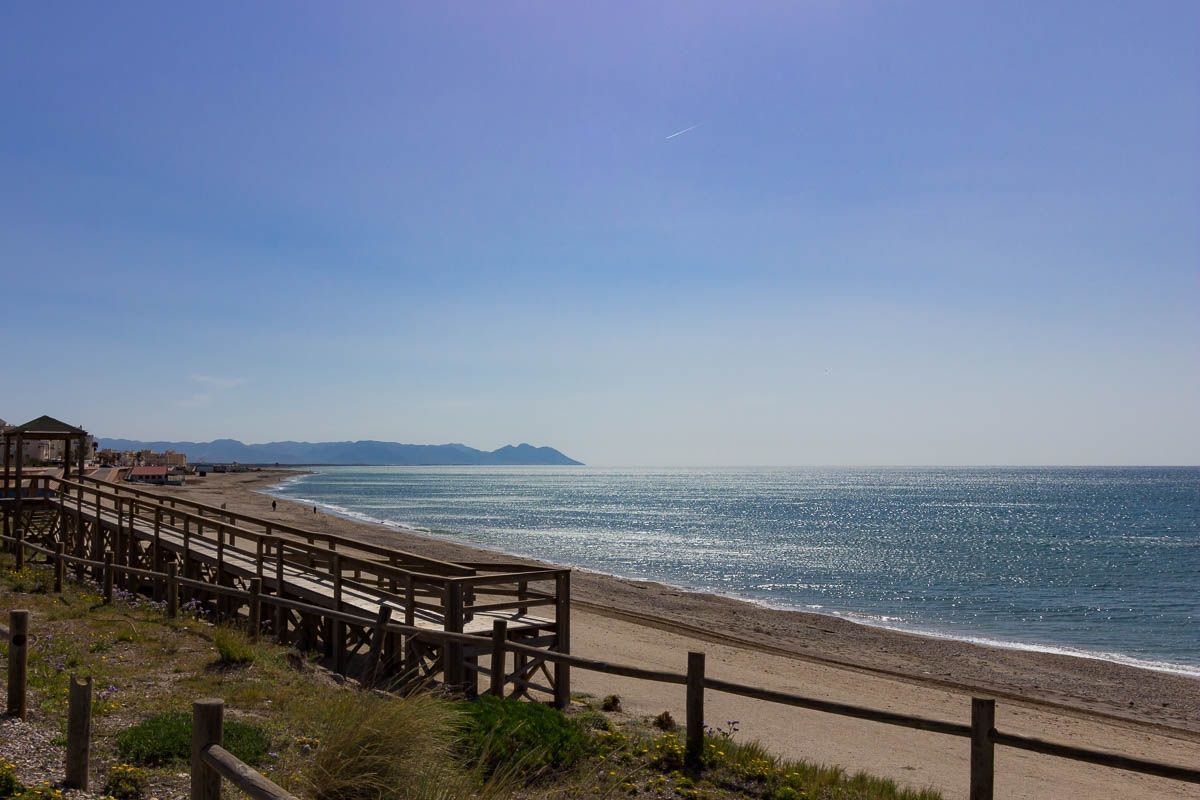 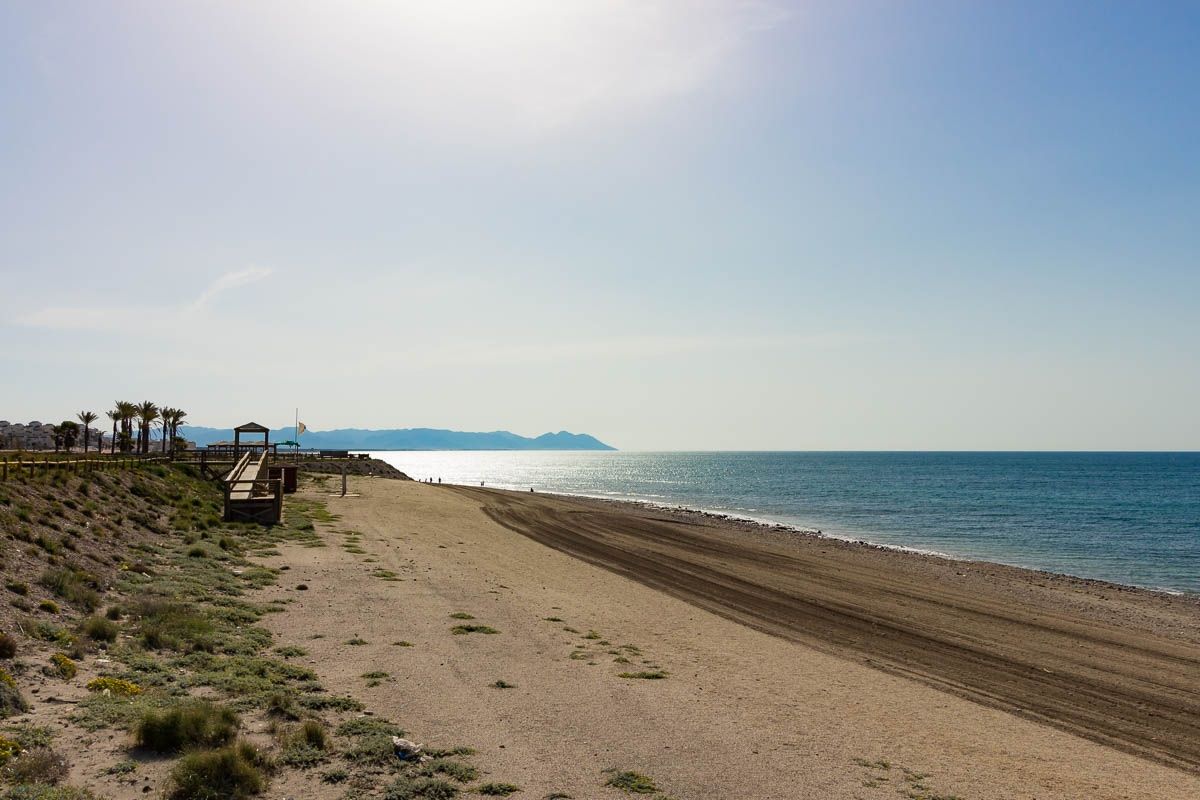 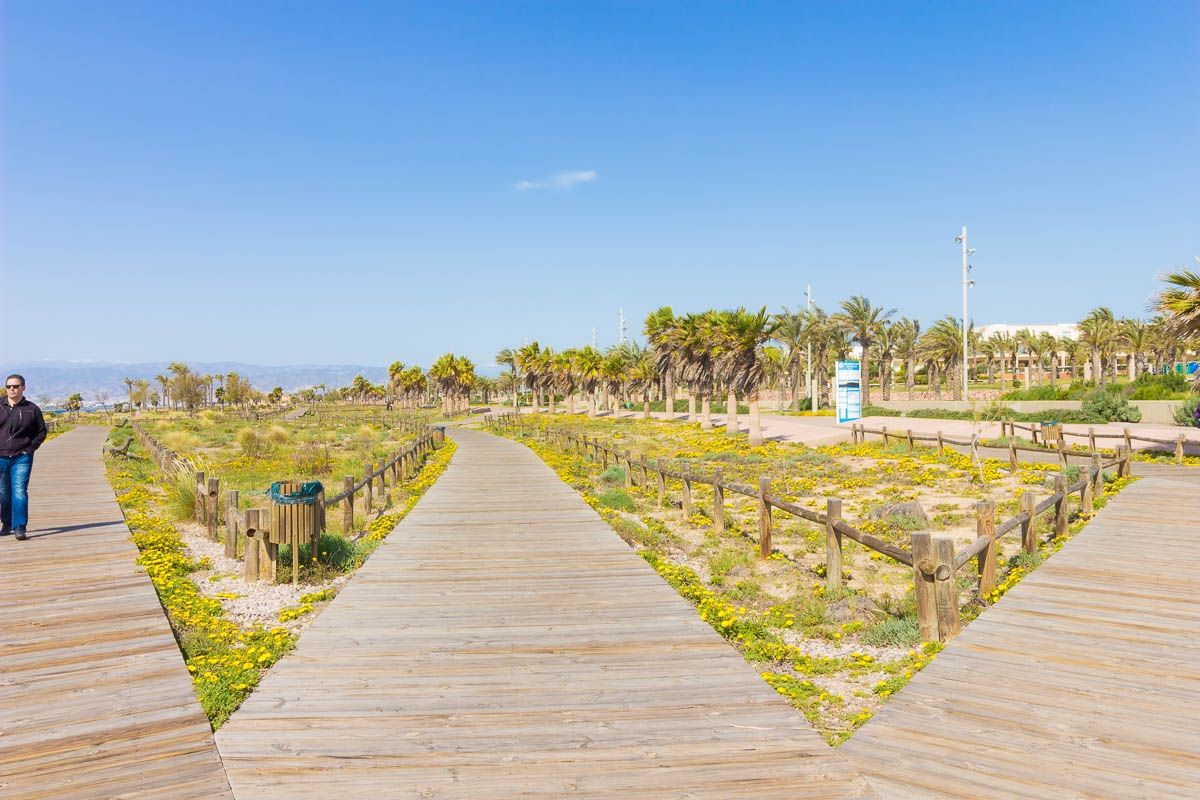 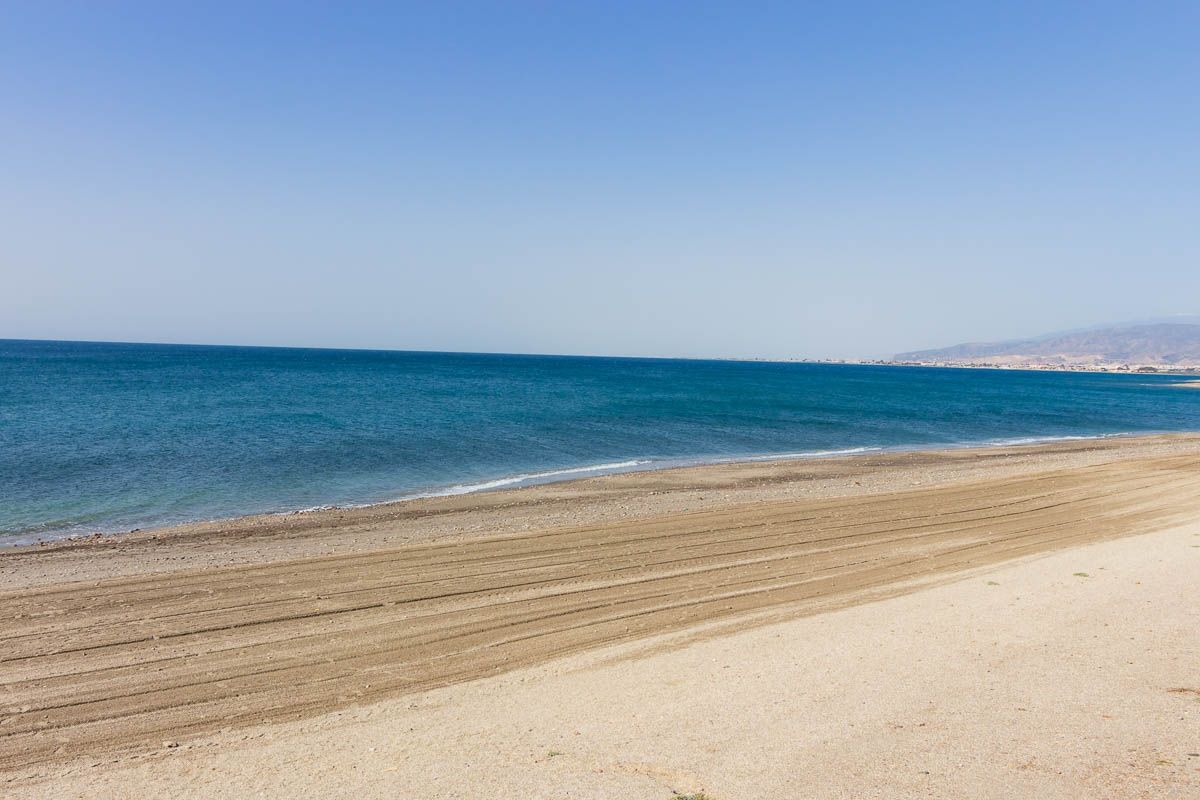 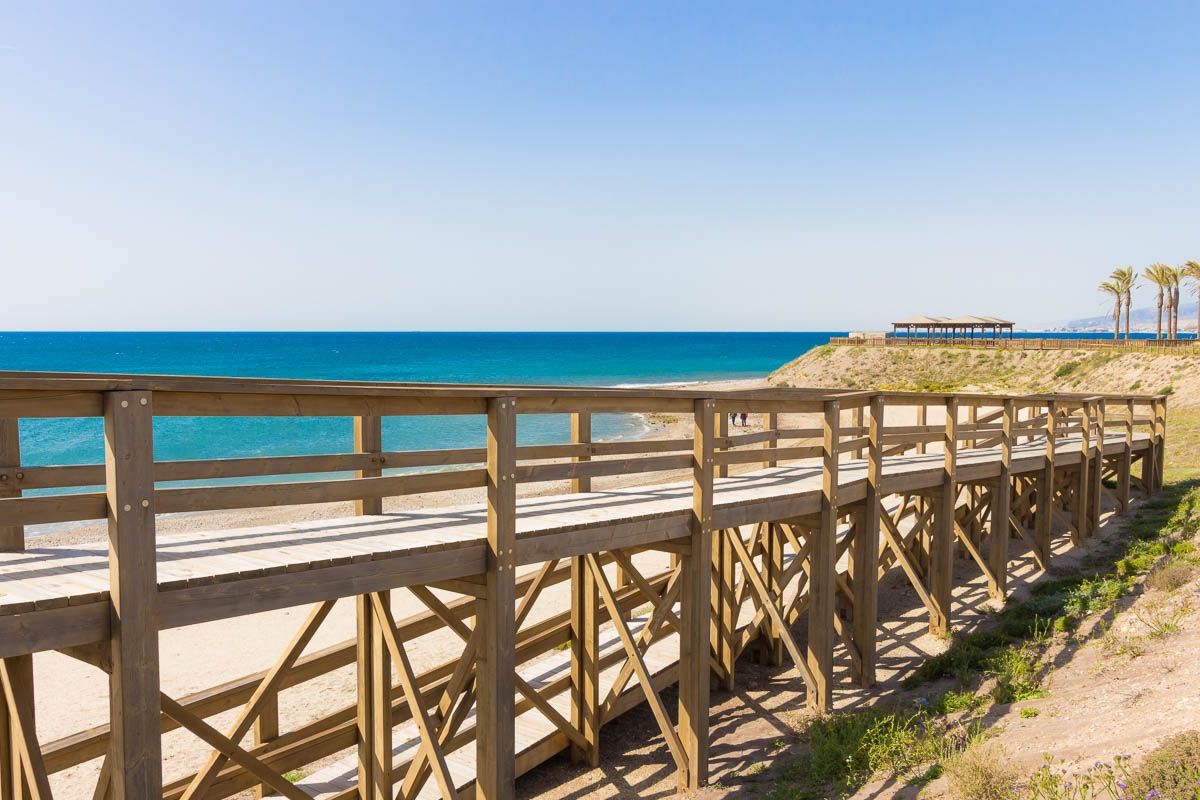 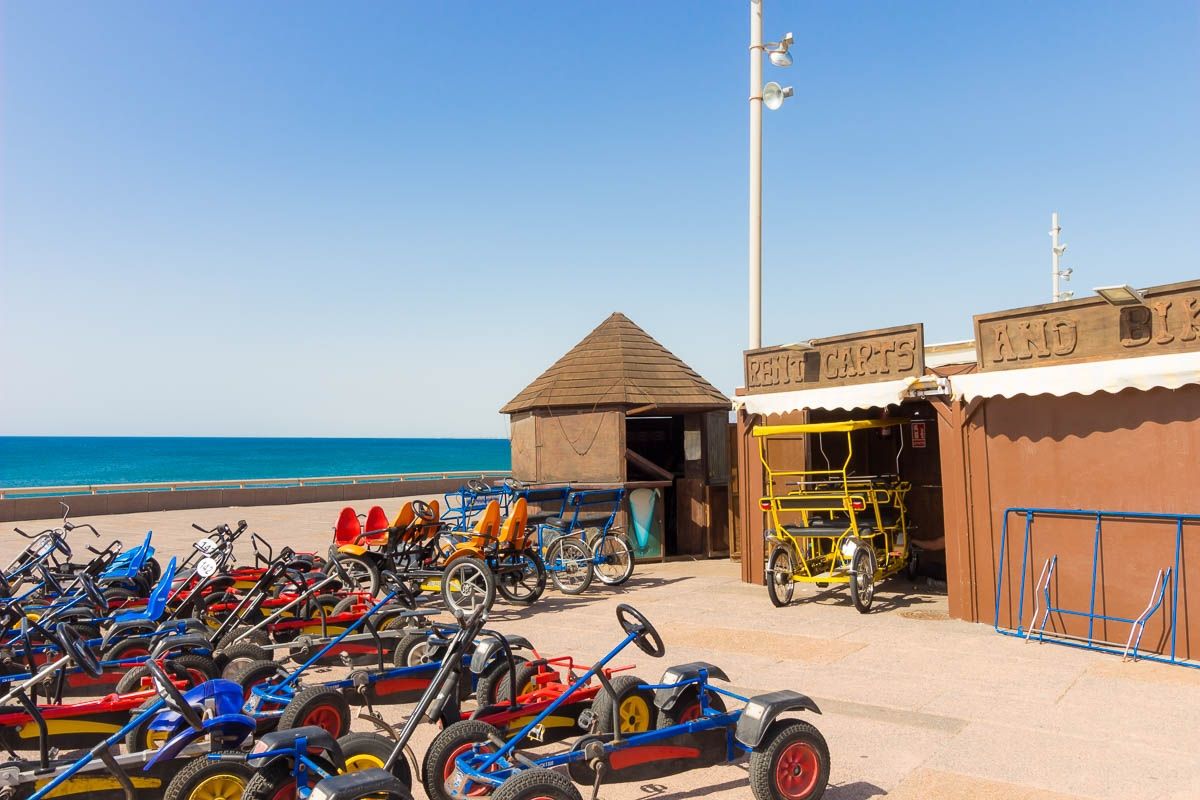 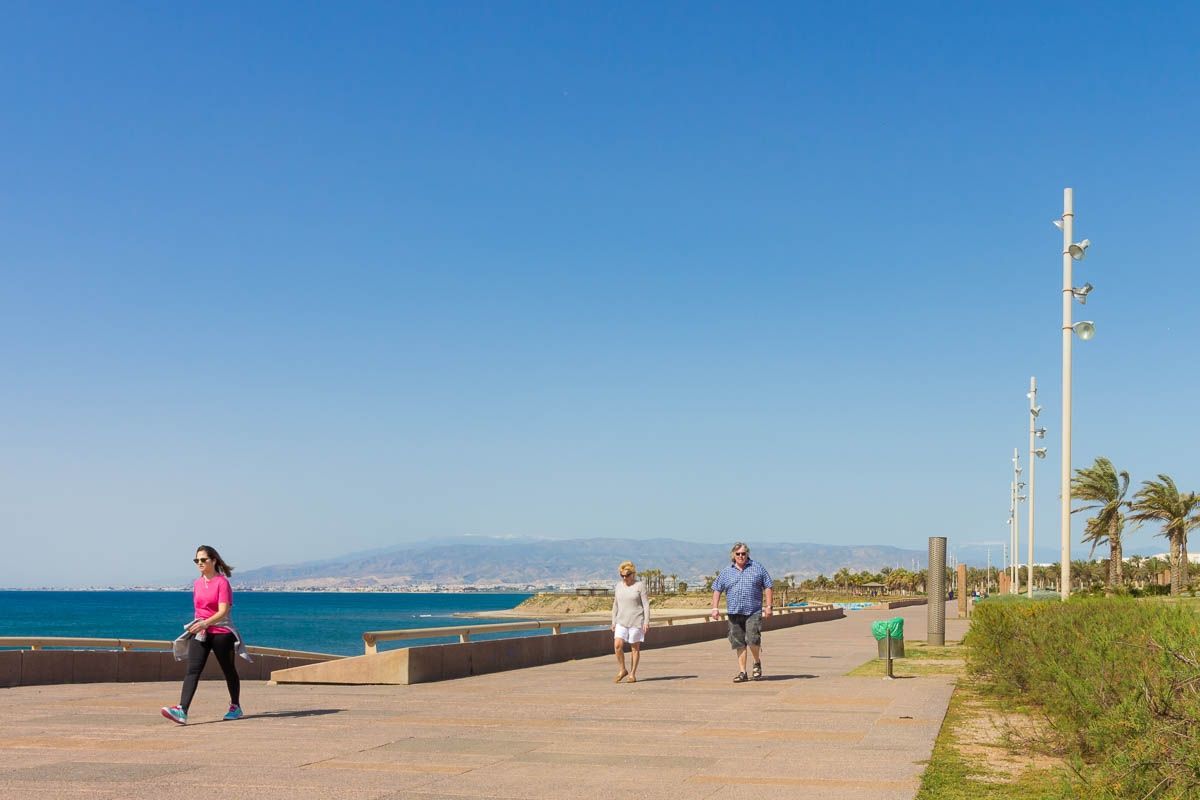 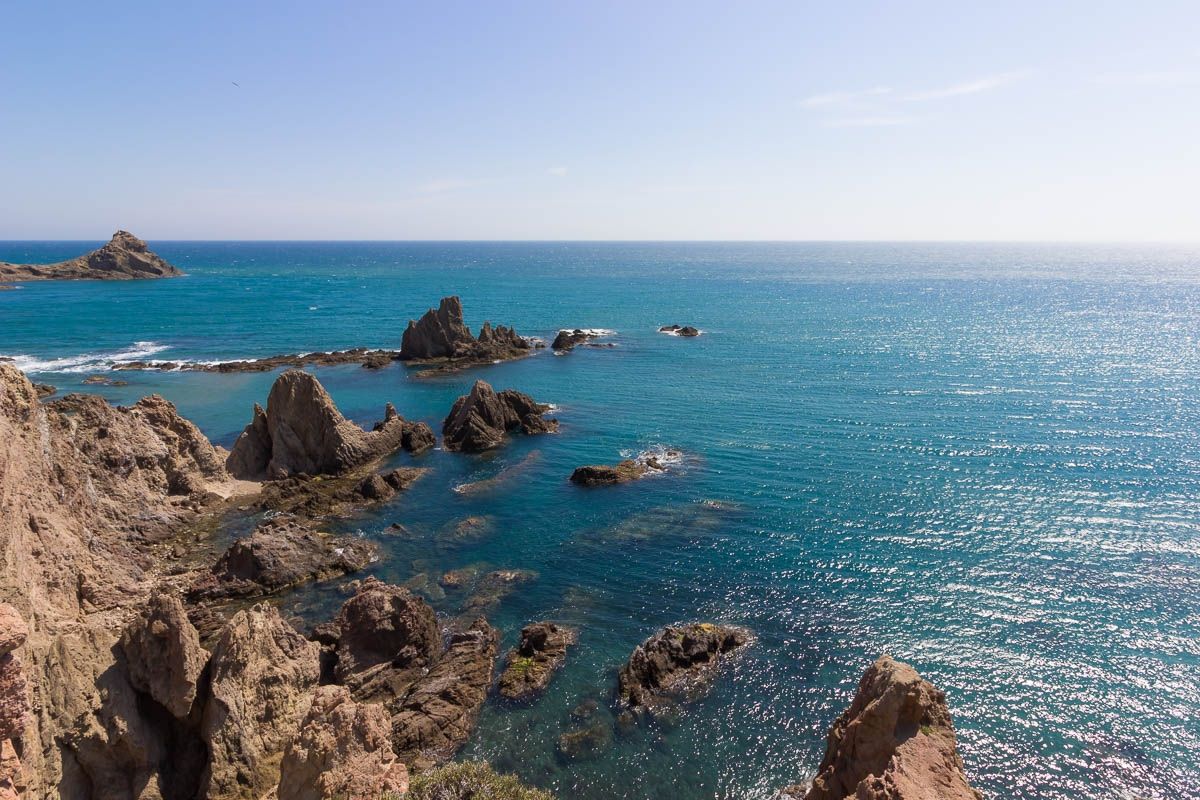 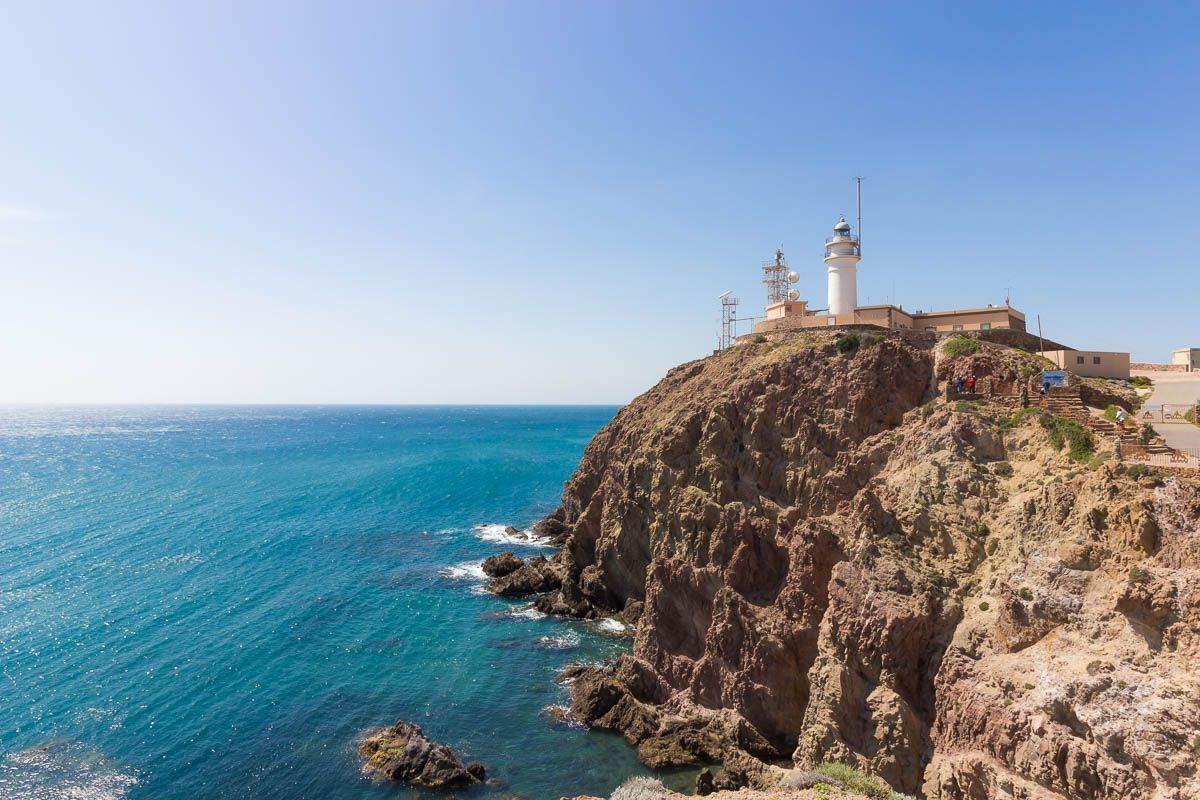 “RETAMARICO” is a bright apartment on the first floor of a building with elevator, located in the urbanization El Toyo (Almería), a quiet and family place even in high season. The environment is privileged, next to the Natural Park of Cabo de Gata – Níjar: a paradise in the Mediterranean.

It has a terrace of 12 m2, facing west, and overlooks the swimming pools, gardens, and 18-hole golf course which is just behind the fence. In addition to sunbathing, the terrace it is very pleasant for reading, making meals or having a snack during most of the year. It has a round table with 6 chairs.

At the entrance of the apartment there is a small hall, insulated with a door, which overlooks the living-dining room. In it there is a table where you can comfortably eat 4 people, two sofa beds and a comfortable armchair. The TV is hanged on the wall, and you can change orientation. The exit to the terrace is through two sliding glass doors.

The living room connects to the kitchen through a door. There is also a window from the kitchen to the living room, with a small ledge very comfortable to leave the dishes and platters before and after using it in the dining area. The kitchen is equipped with ceramic hob, microwave, refrigerator with freezer, extractor fan, coffee maker, toaster, and kettle. In the kitchen is also the washing machine.

From the living room there is another door that -with a small corridor- connects to the bedroom and bathroom. So this area can be isolated.

The bedroom has a bed of 150×190 cm, a large built-in wardrobe and bedside tables that are also drawers. The large window is facing southwest.

The bathroom has a bathtub, sink, bidet and WC. It also has a window to the outside.

All windows and glass doors of the house are double glazed, and with a very good thermal insulation.

The house has an iron and a hairdryer. WIFI is also available.

The apartment has a parking space under the building, but you can also leave the car in the street, but within the urbanization, which is accessed through a door, and has private security service 24 hours.

The urbanization has two swimming pools, and paddle tennis court.

Cabo de Gata-Níjar has the 50 kilometers of best-preserved cliff coast on the European Mediterranean coast. In the area you will find urban beaches like San José and Aguamarga; large magnificent natural beaches such as Mónsul and Los Genoveses; hidden and almost inaccessible coves like Carnaje and Enmedio; and spectacular volcanic and reef cliffs such as Punta de los Muertos and Mesa Roldán

It has a sea bed with extensive oceanic Posidonea meadows, and an abundant fauna: crabs, octopuses and fishes, among them the nacra, the largest protected bivalve of the Mediterranean considered a true jewel of nature.

Close to the fishing village of San Miguel, the salt lakes of Cabo de Gata concentrate much of the avifauna of the Park. Throughout the year more than 80 species of birds can be observed.

One of the most significant features of the natural park is its humanized character. Numerous abandoned cortijos, water and wind systems all recognized as a Property of Cultural Interest, are integrated in the landscape and are the testimony of a culture, largely disappeared.

It is worth visiting Almería for its original old town, and the atmosphere of tapas in its narrow streets.

Towards the interior of the province, and to a maximum distance of 70 km there are also many worthy towns to visit: Tabernas, Laujar del Andarax, Níjar, Fondón. You can enjoy the rich and varied local gastronomy, the picturesque of its urban and rural landscapes, and the cheerful and welcoming character of the people.

Towns in the Natural Park:

Other towns near apartment:

It is also characteristic of Tabernas the oil. The climatic influence of the desert gives special peculiarities.

Close to El Toyo there are some Golf Courses:

Patricio and Belén are passionate about Andalucía. When they just got married and for professional reasons, they were living in Almería, and afterwards in Sevilla. After the years, they returned with their children to their homeland. Years later they have had the opportunity to buy “Retamarico” to continue enjoying when they can, short stays of rest in this land that such good memories brings them.

Their children have grown and now they cannot “escape” with them to this oasis of peace as much as they would like. That is why they have decided to share this magnificent site with people from all over the world.