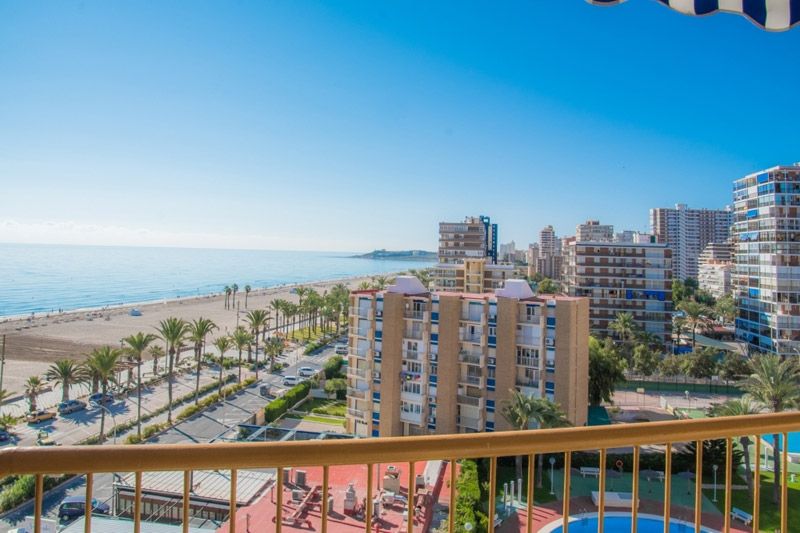 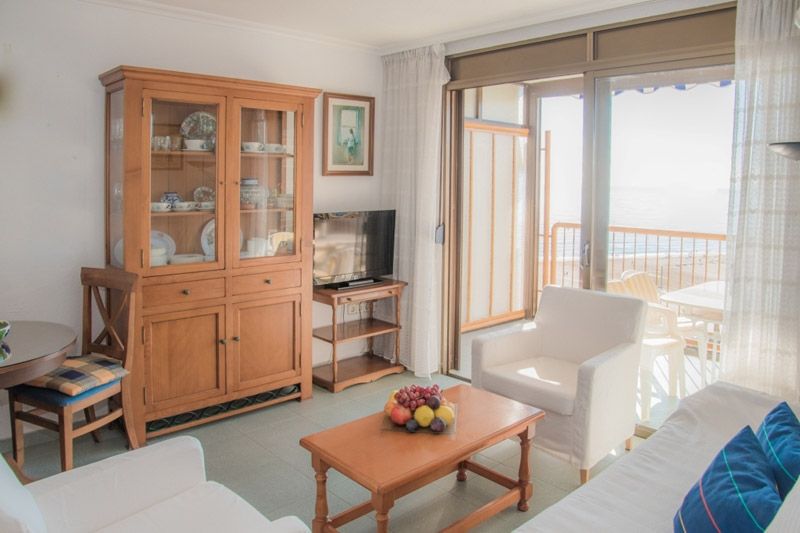 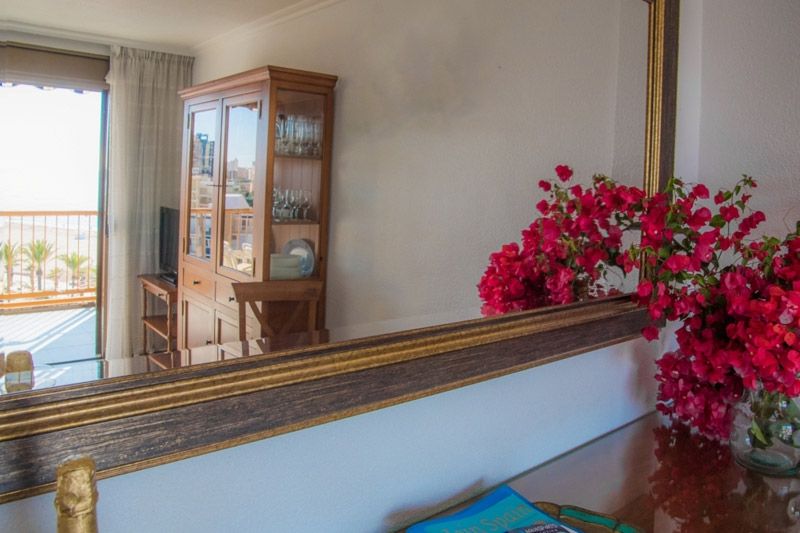 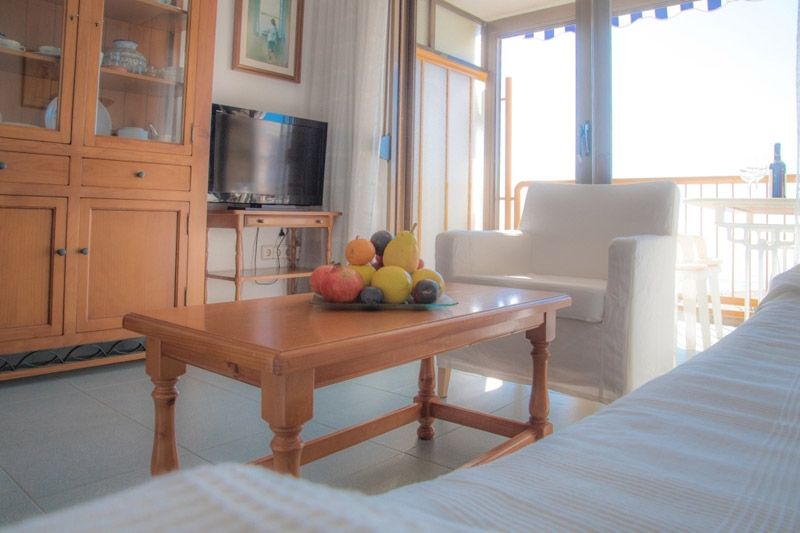 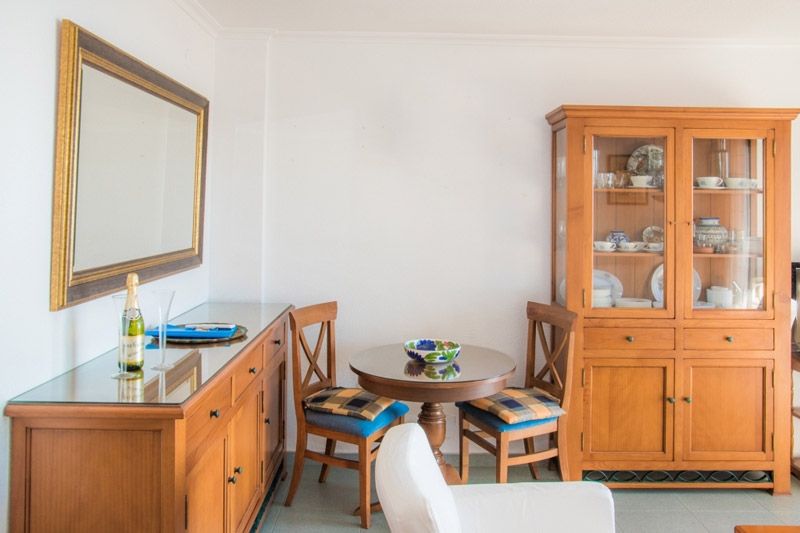 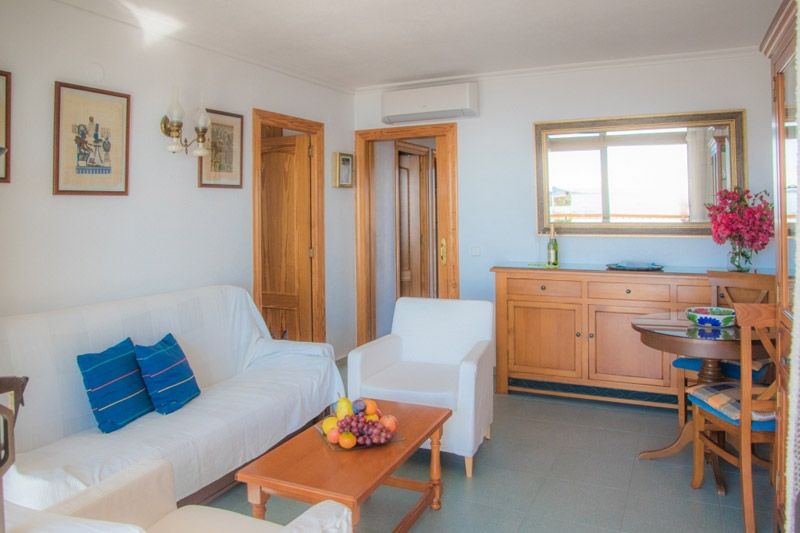 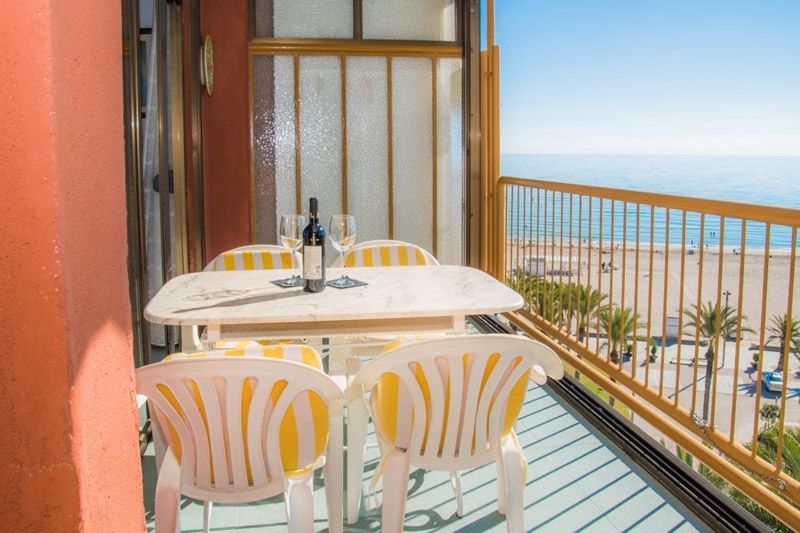 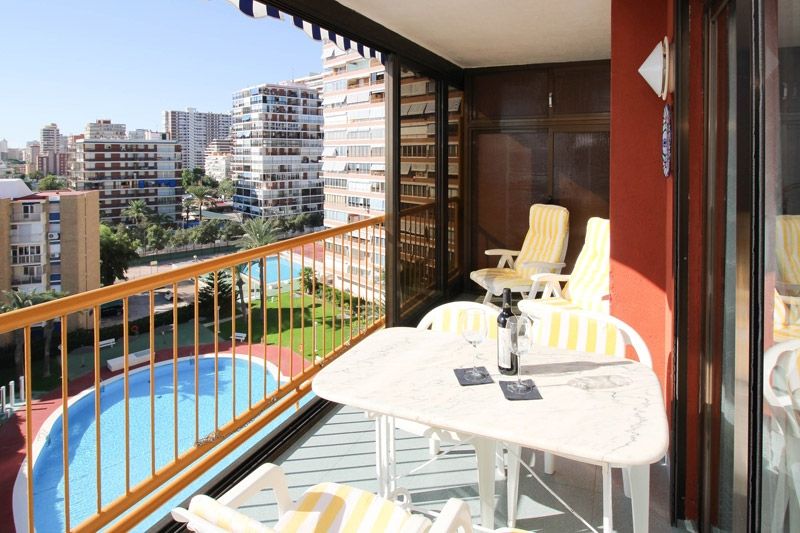 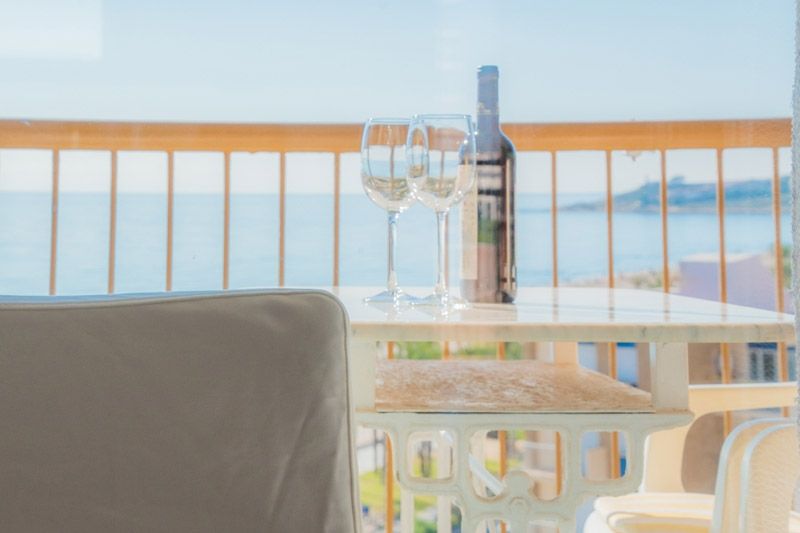 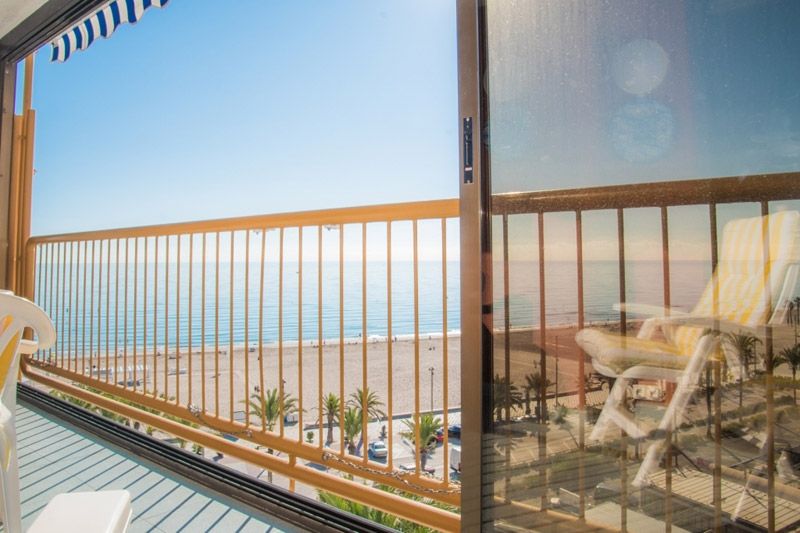 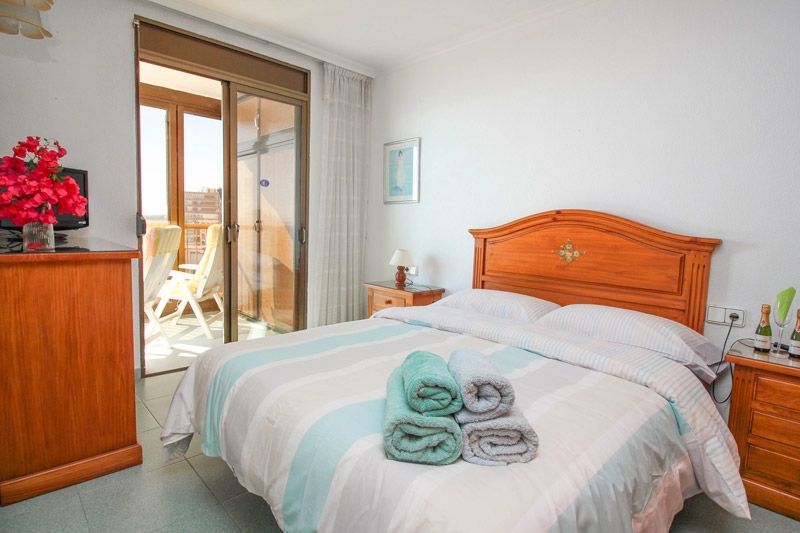 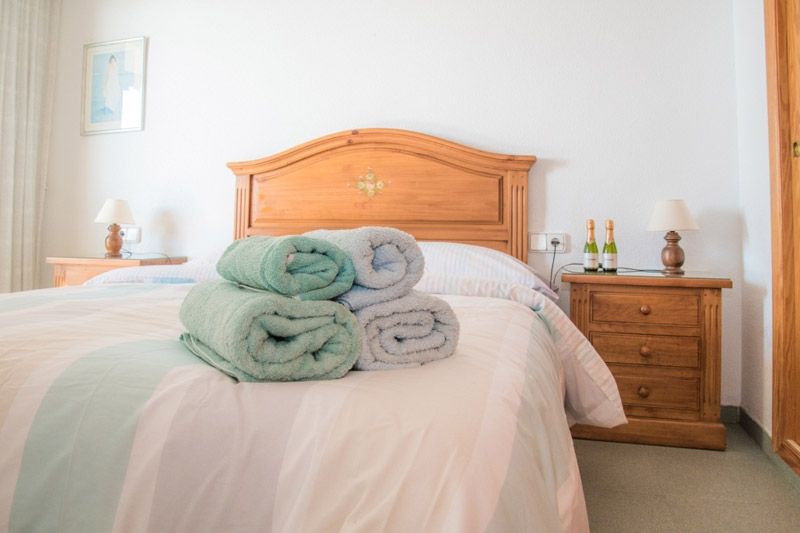 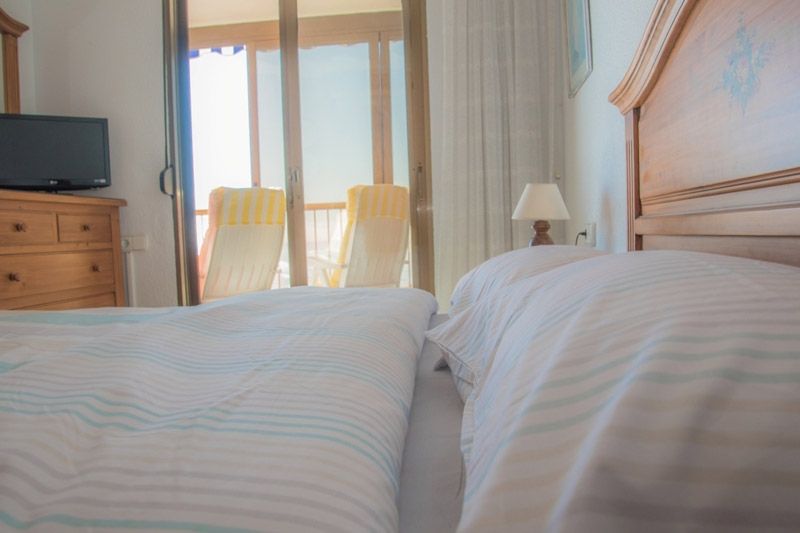 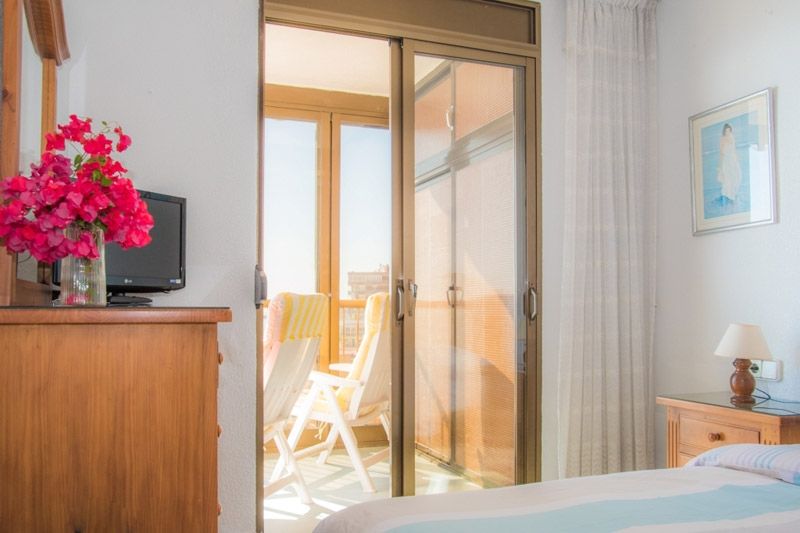 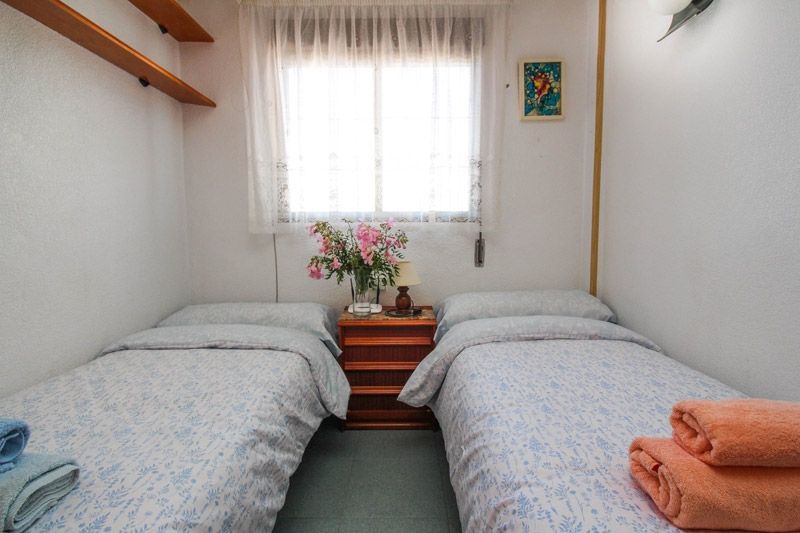 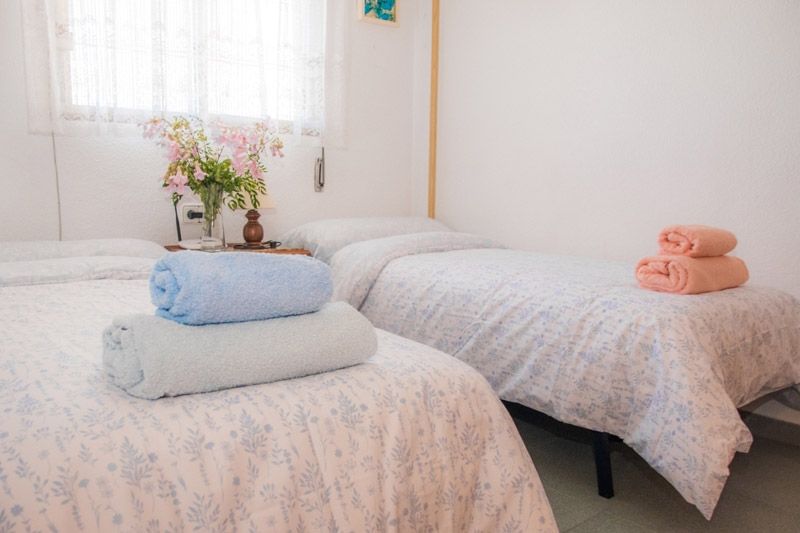 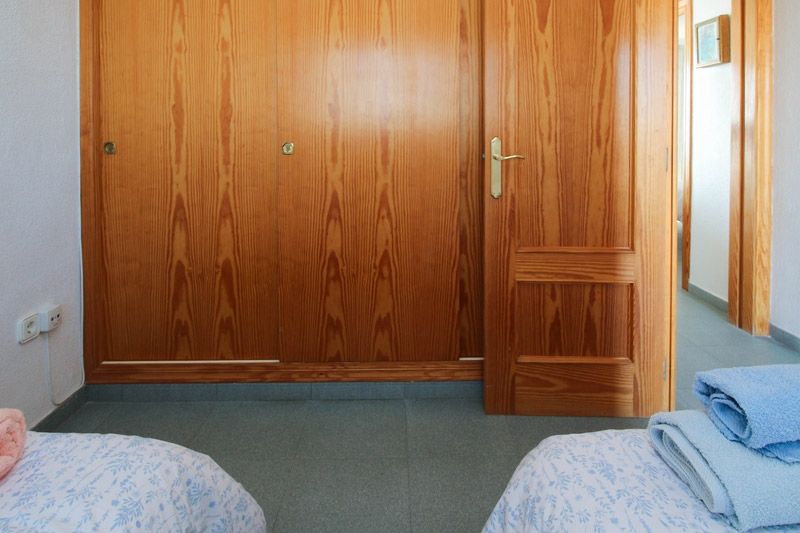 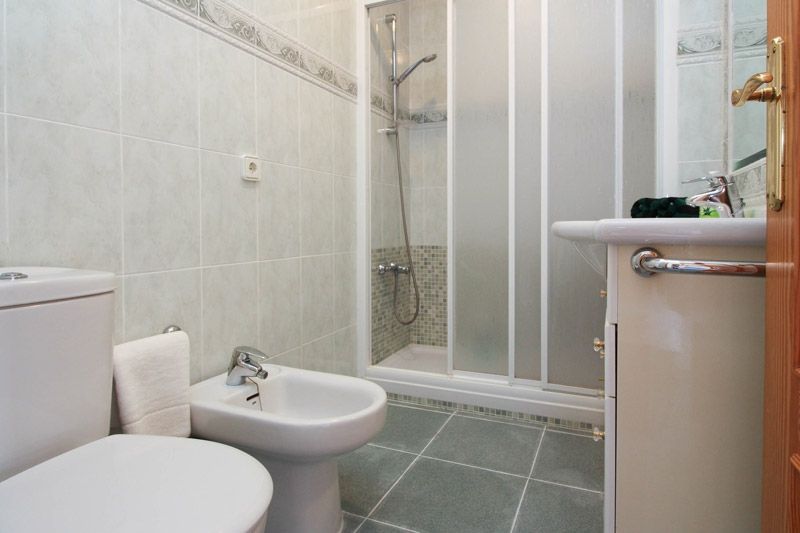 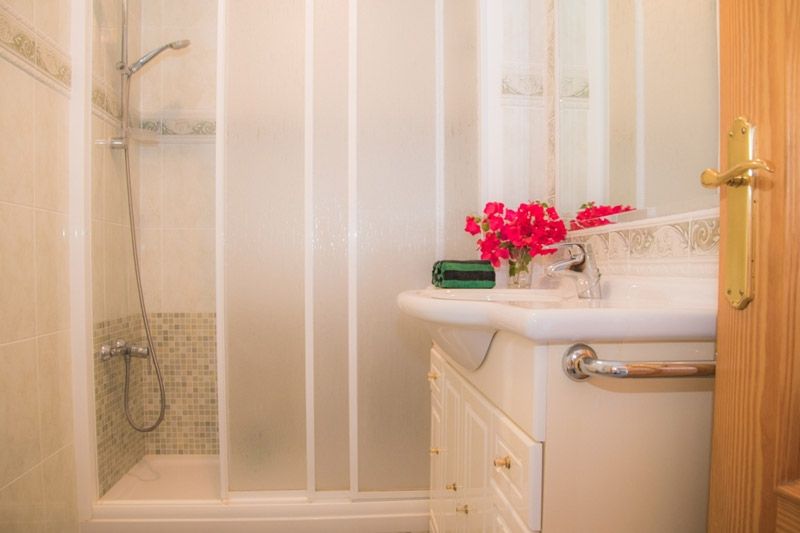 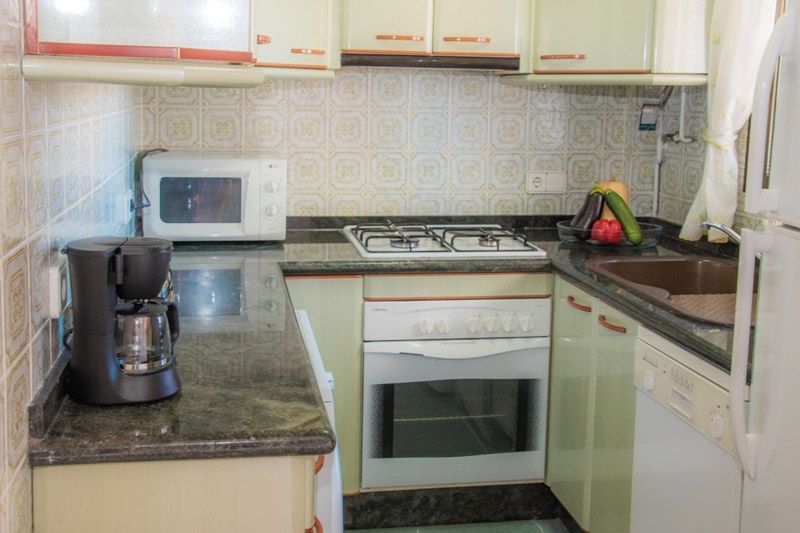 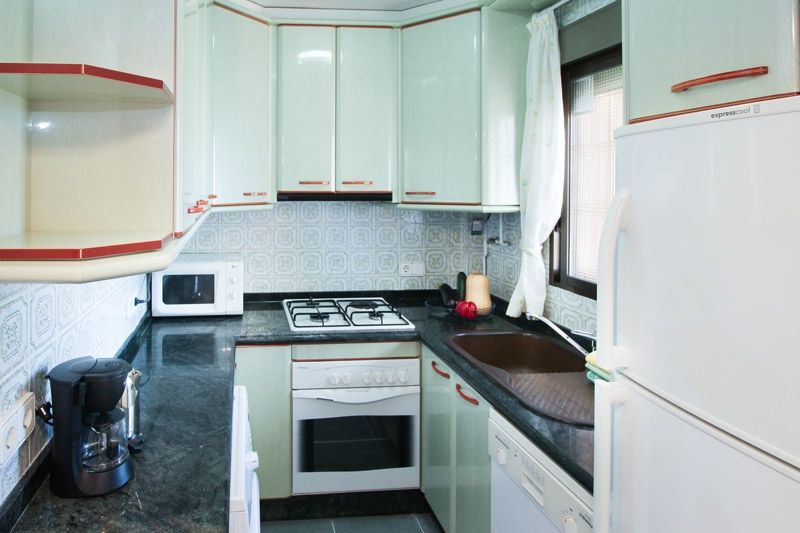 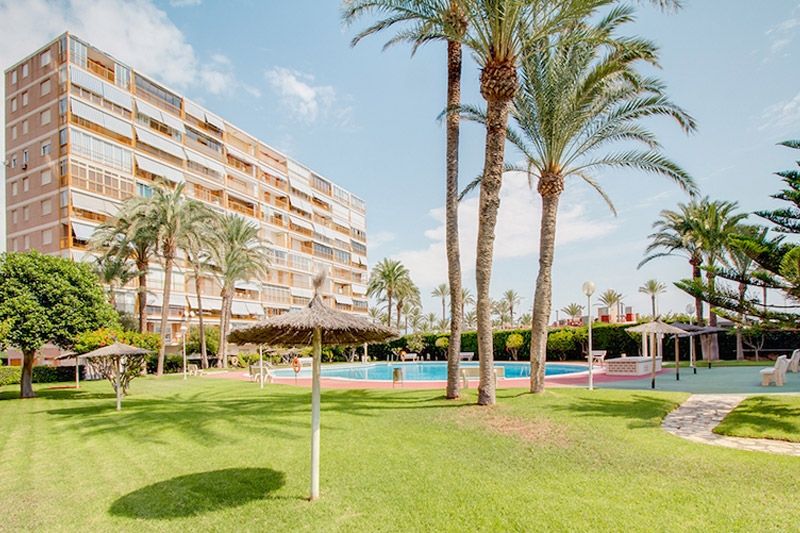 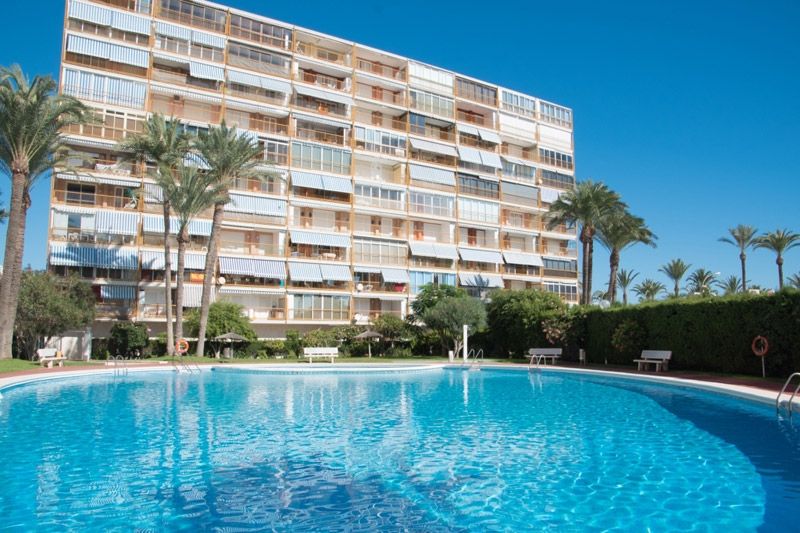 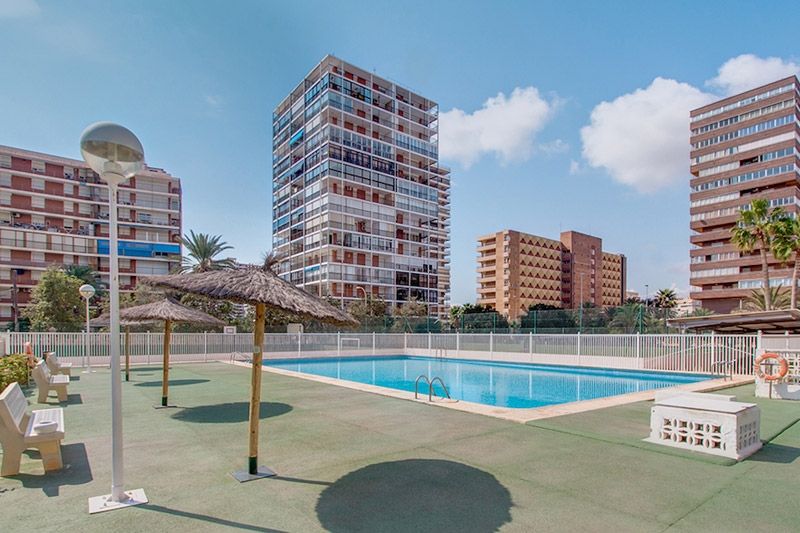 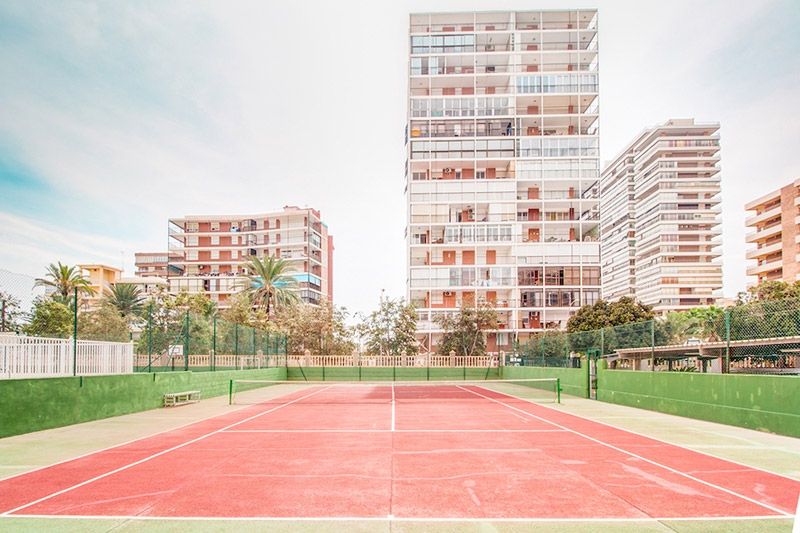 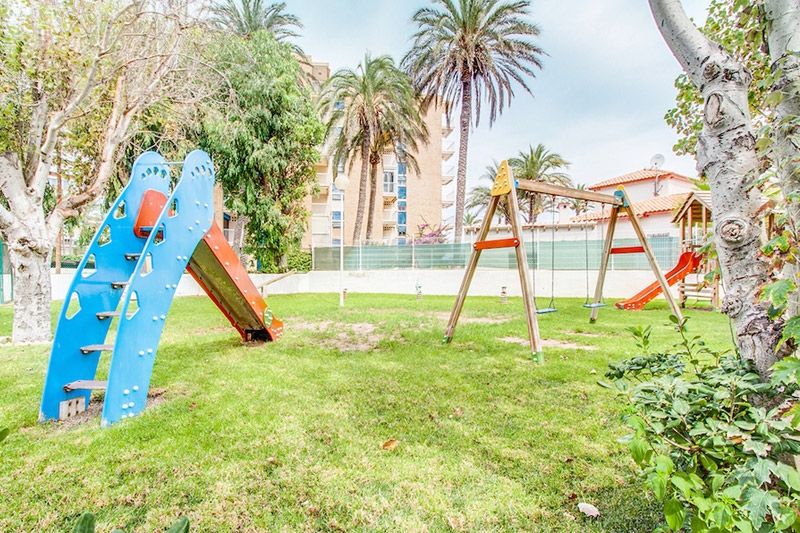 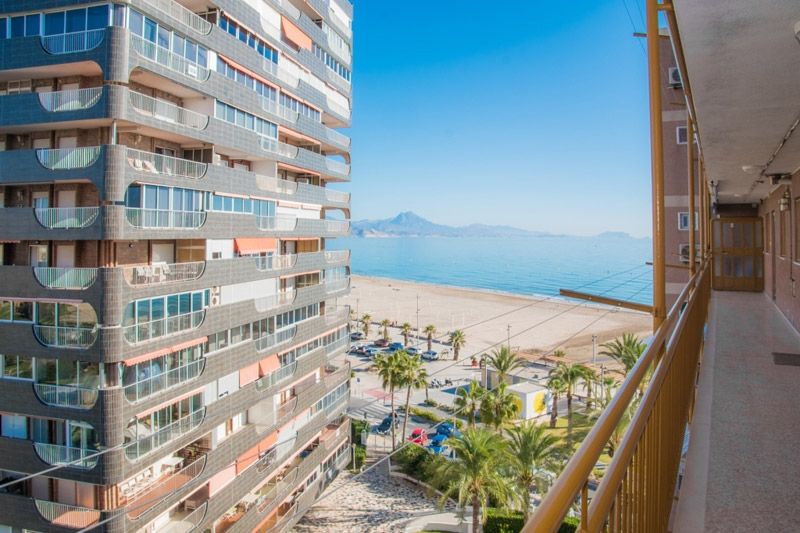 “NIZA III” is a two bedroom apartment sea front, at the Promenade in Playa de San Juan. Its location is privileged, and it has a 10 sqm terrace with southeast orientation, which is very pleasant to read, sunbathe or having meals whole year round.

The lounge – which connects to the terrace – has a comfortable three-seater sofa, and two armchairs in front of the 34-inch TV. On the wall in front of the terrace there is a mirror, so the sea views are enjoyed even with your back to it. There is an aircon (cool and heat) that covers the lounge and the main bedroom.

The master bedroom has a double bed of 150 x 190 cm, a large wardrobe, and double glass door to the terrace. There is also a 22-inch TV. And from the bed you can see the Mediterranean.

The kitchen has microwave, oven, gas and electric kitchen, refrigerator with freezer, dishwasher, toaster and coffee maker. It is well equipped with cutlery and crockery. Here is also the washing machine.

In the little corridor between the kitchen and second bedroom there is an aircon (cool and heat) that covers both rooms.

The bathroom has a sink, large shower, bidet and WC.

The house has WIFI.

The urbanization has swimming pools (a standard one, with an area for children, and another one for swimming) with natural grass and parasols and trees, tennis court, playground and private parking.

At the entrance of the building there are 3 steps, but there are also access ramps.

The apartment is very well connected with Alicante and with other beaches as Benidorm, Altea, etc.: the tram stop is only 200 meters away and buses 21 and 22 stop right at the back door of the building. Also on the rear facade of the building there is a taxi rank

“NIZA II” is in Playa de San Juan. The area belongs to the municipality of Alicante, but is 10 km north from the city center. This area was built with big avenues and green parks.

To the north of Playa de San Juan is Campello: with a population over 24,000 inhabitants -and 100,000 residents in summer time-, it nevertheless possesses the quietness and the charm of the traditional marine populations.

We are Juan Antonio and Anunciación. We met this place for our first job as teachers at a company in Campello. We liked it so much that we were excited about this place facing the sea. We bought this apartment and enjoyed it here. We have taken care of it and have improved it little by little. Now our daughters are older and work each one in a place. We are retired and only come to San Juan from time to time. We have decided to share Niza III with people from all over the world, hoping you enjoy it and are as comfortable as we have been here