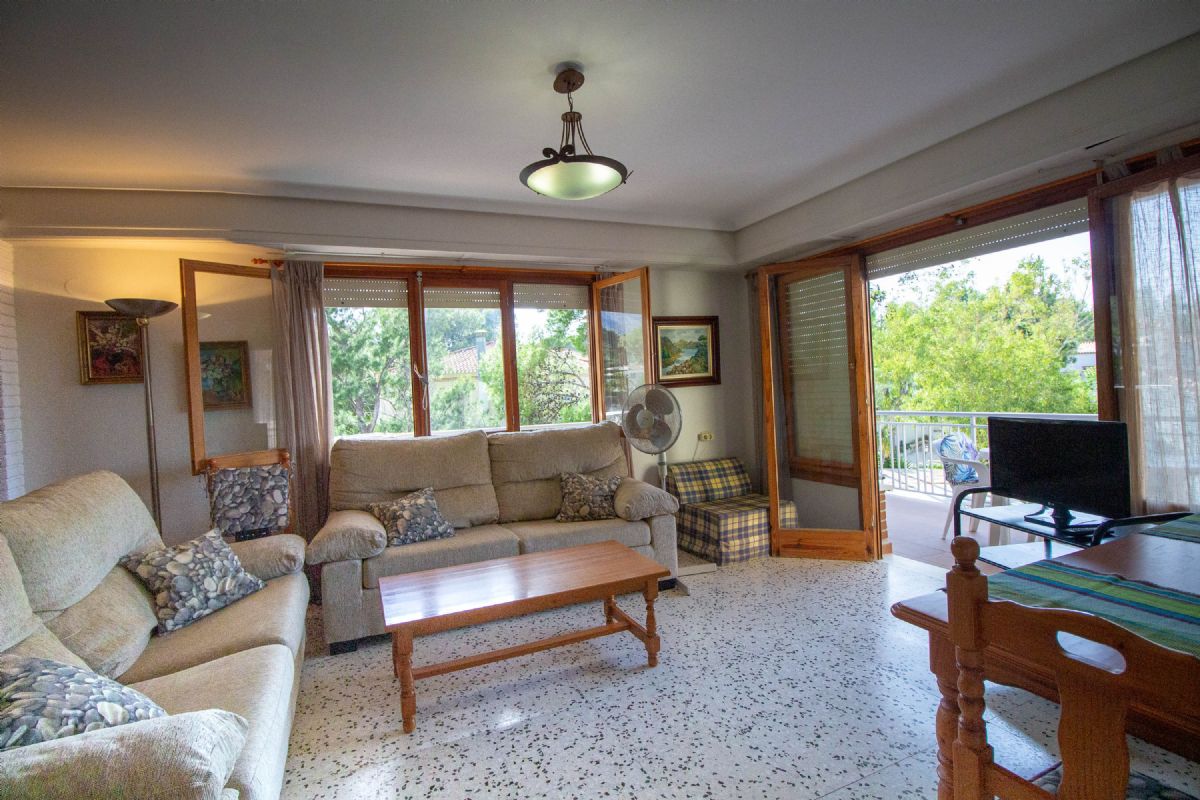 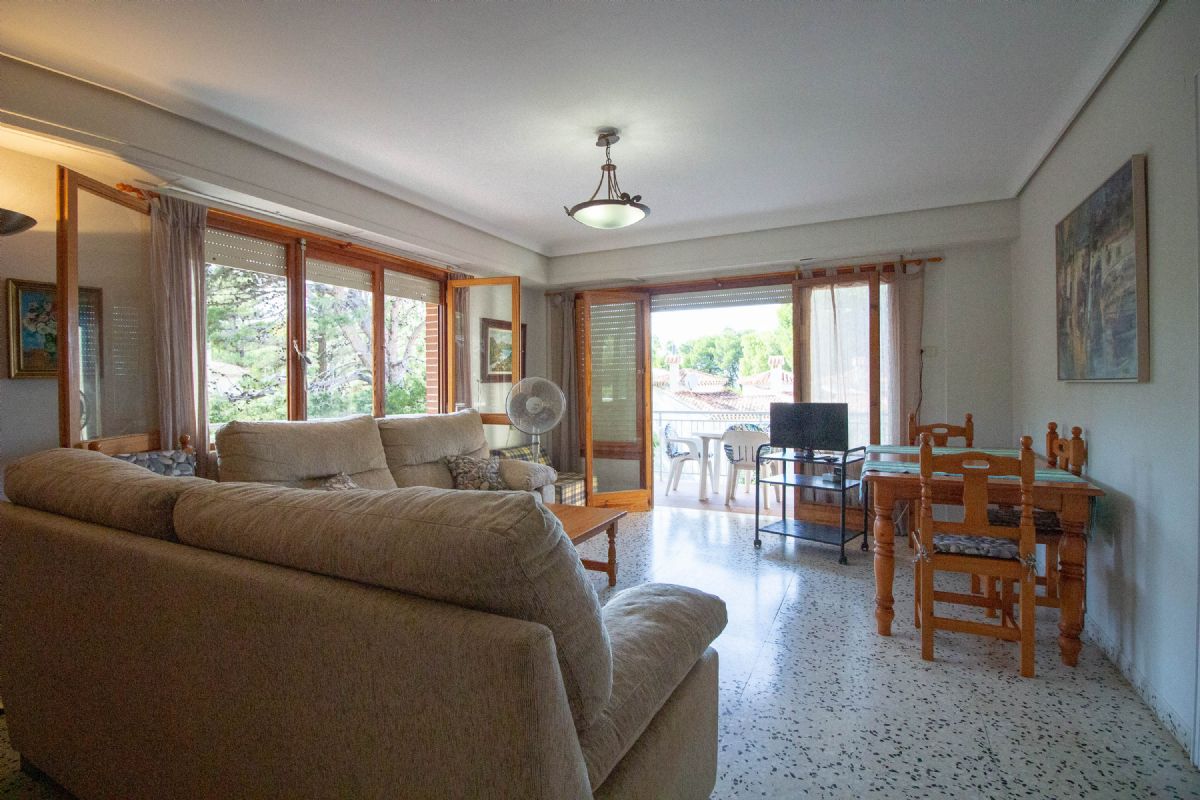 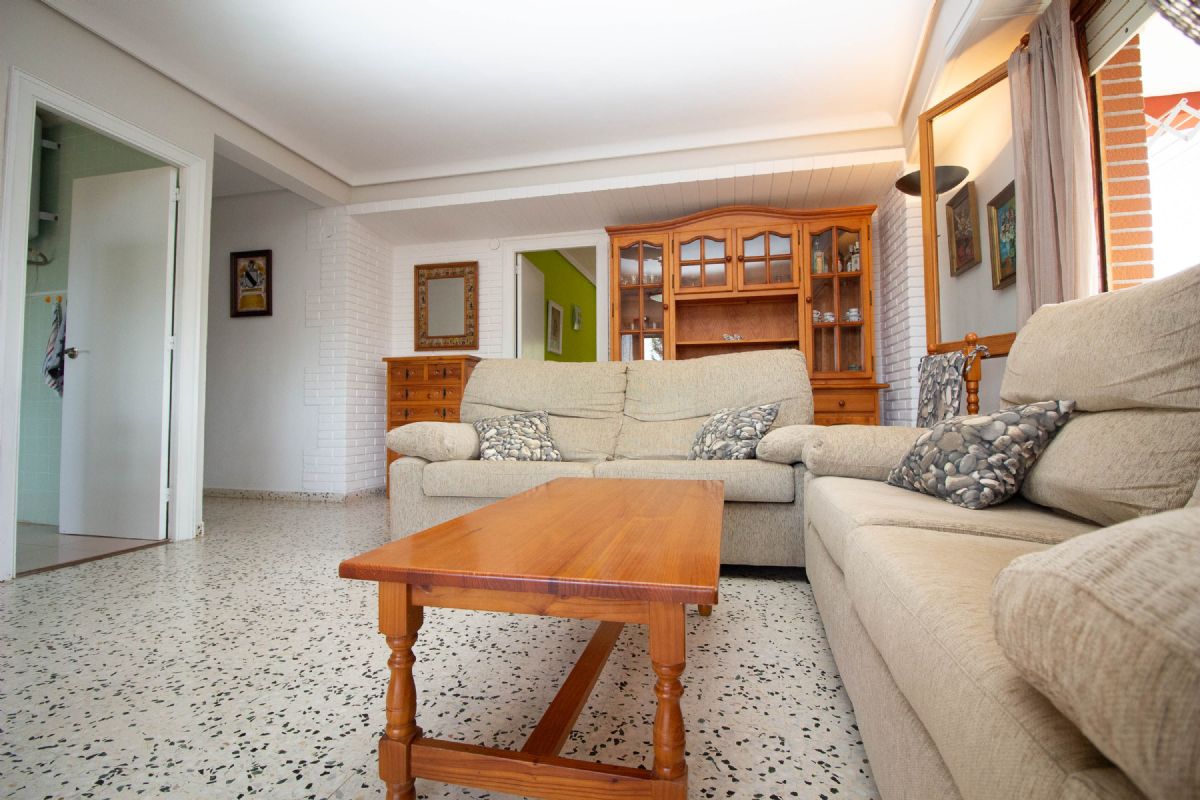 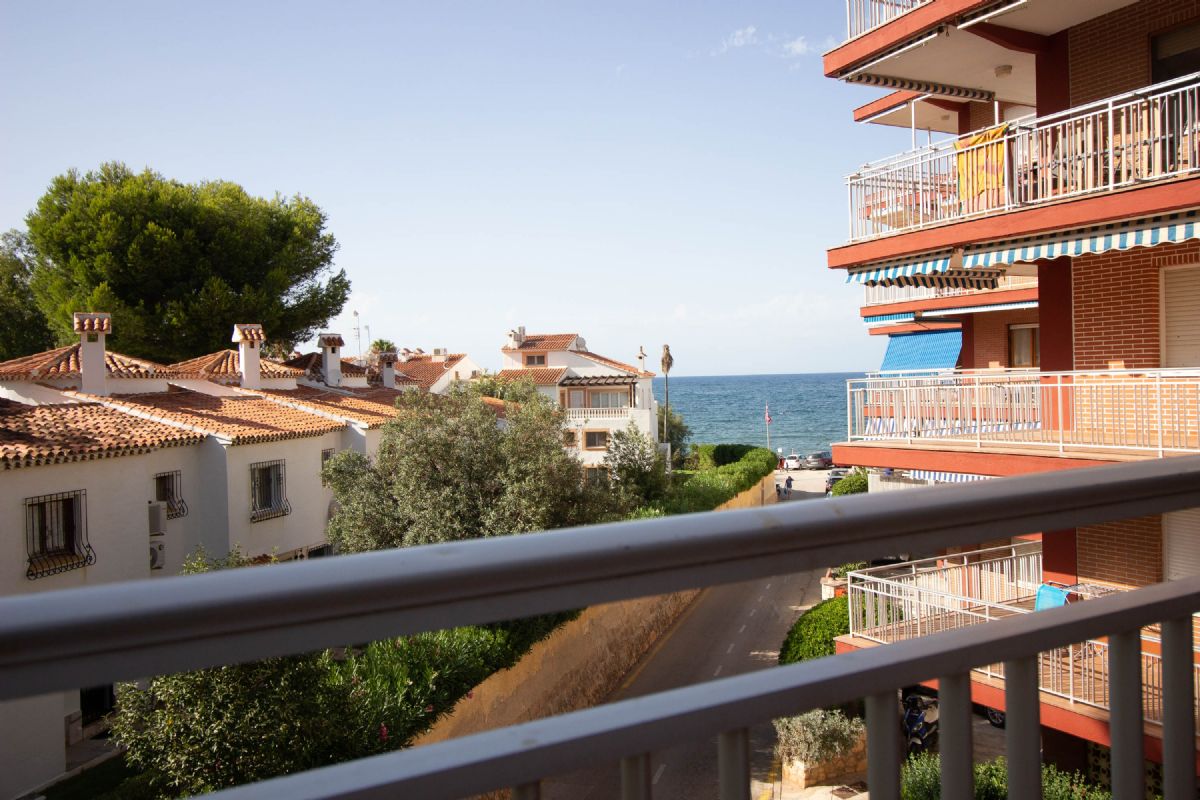 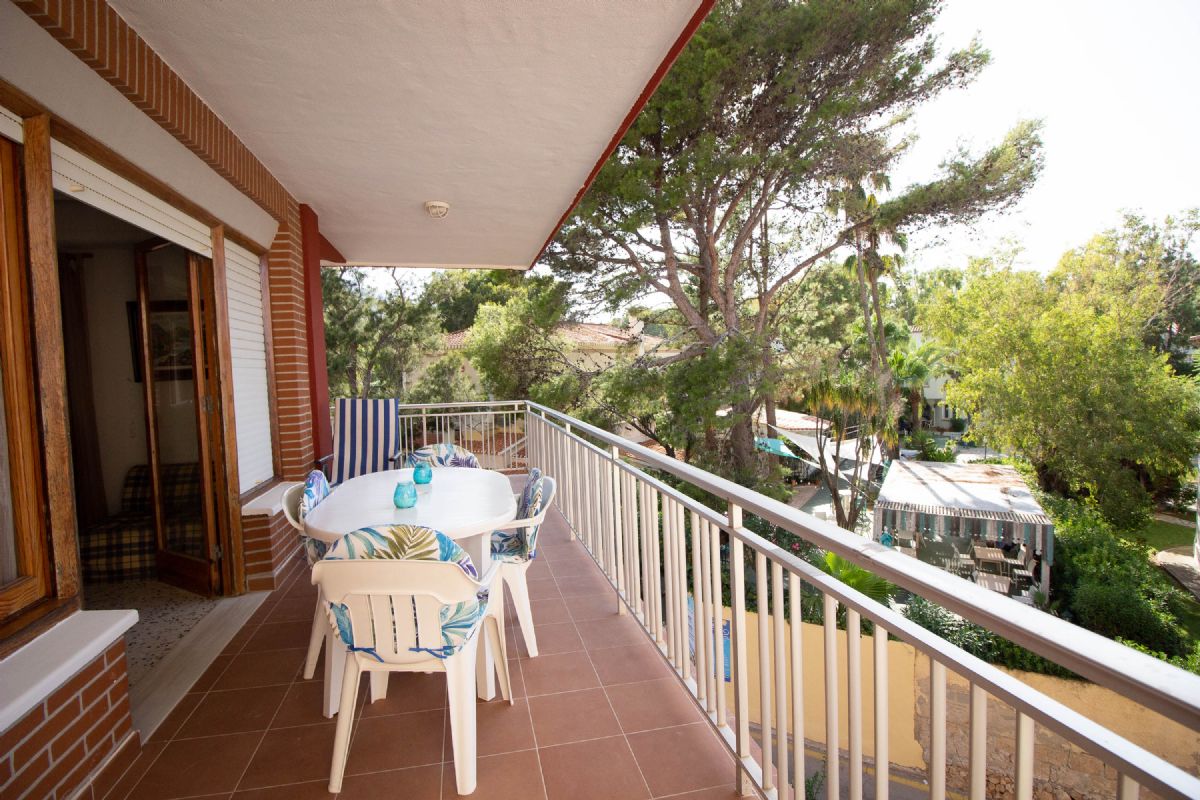 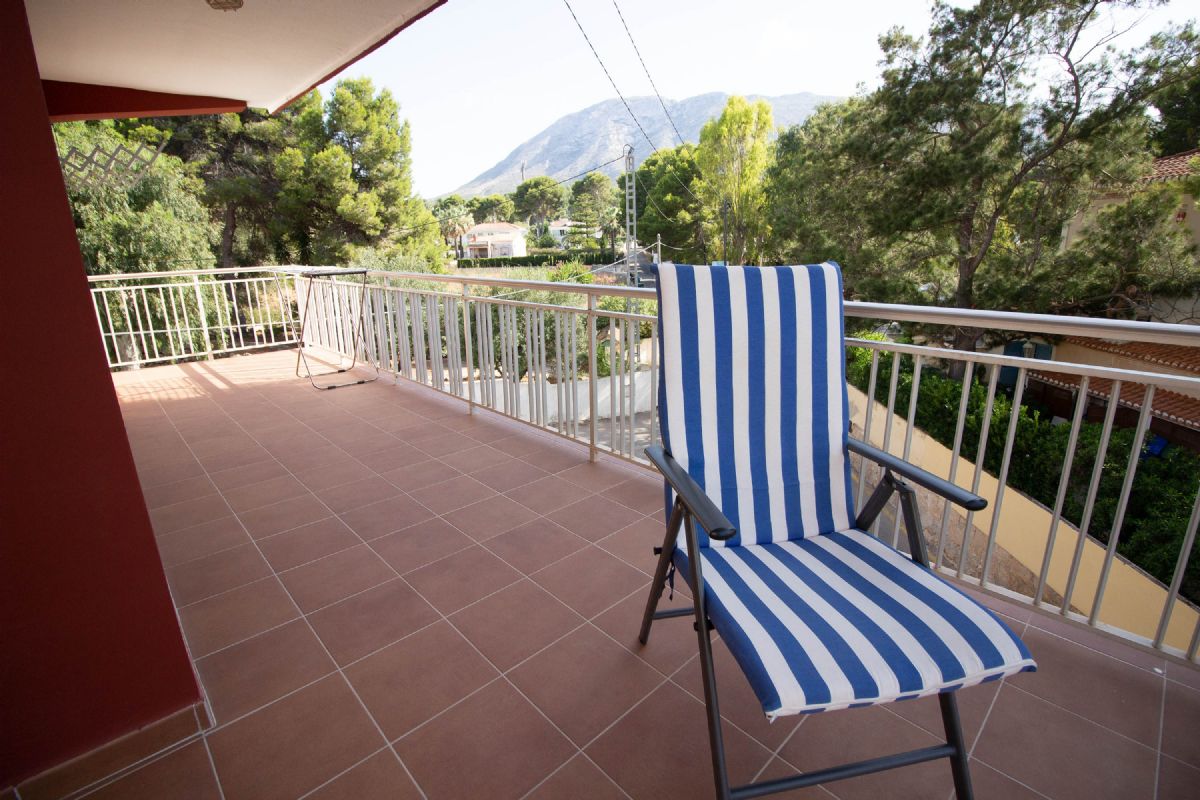 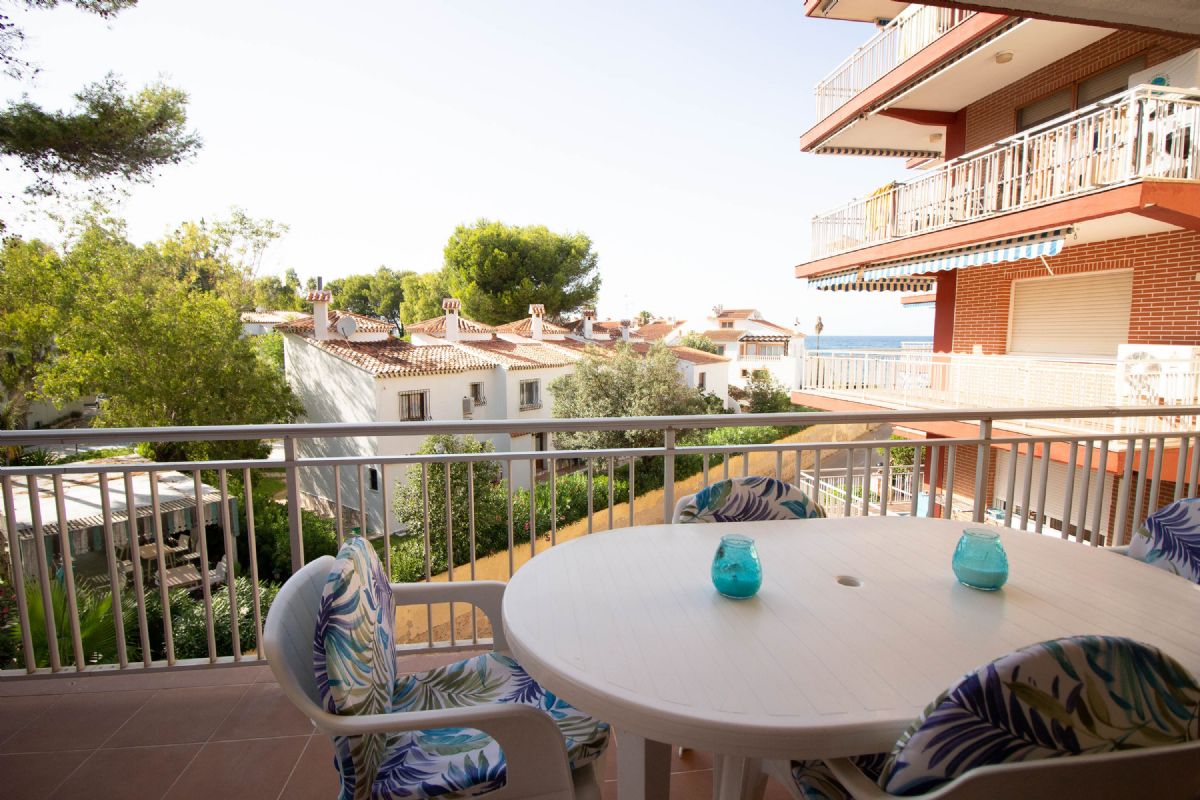 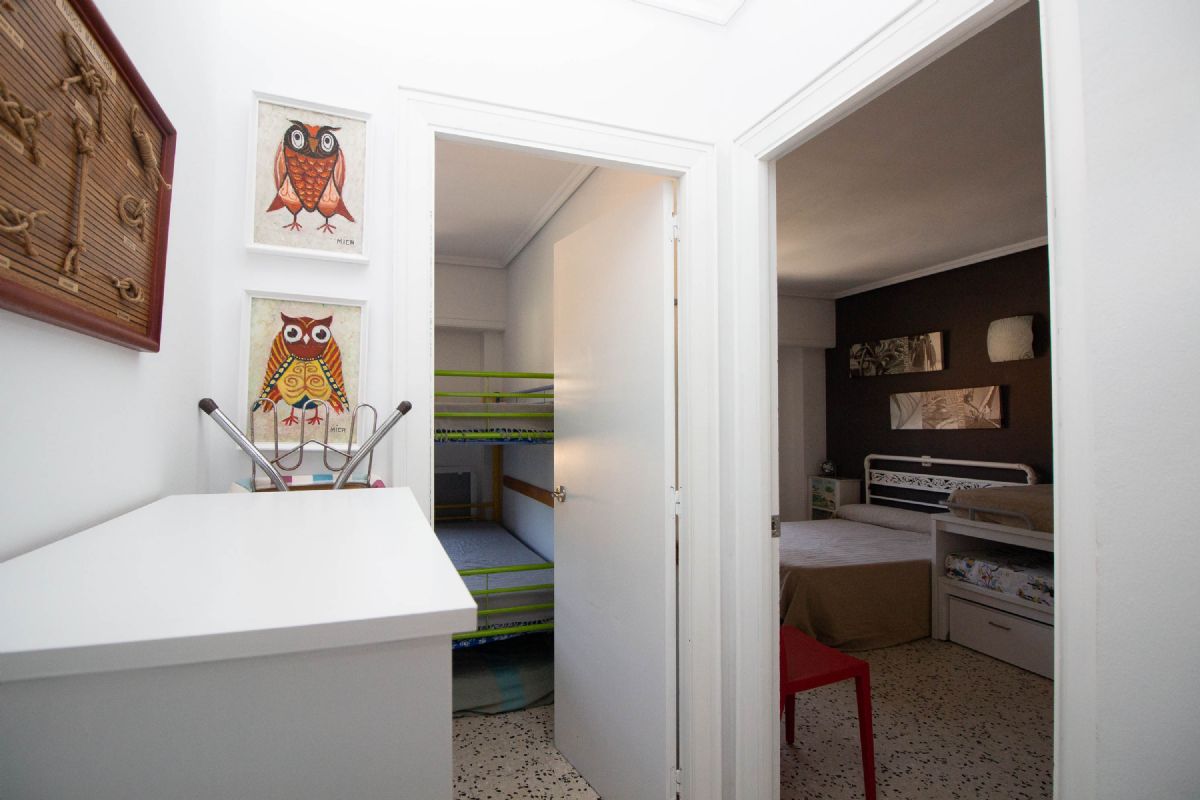 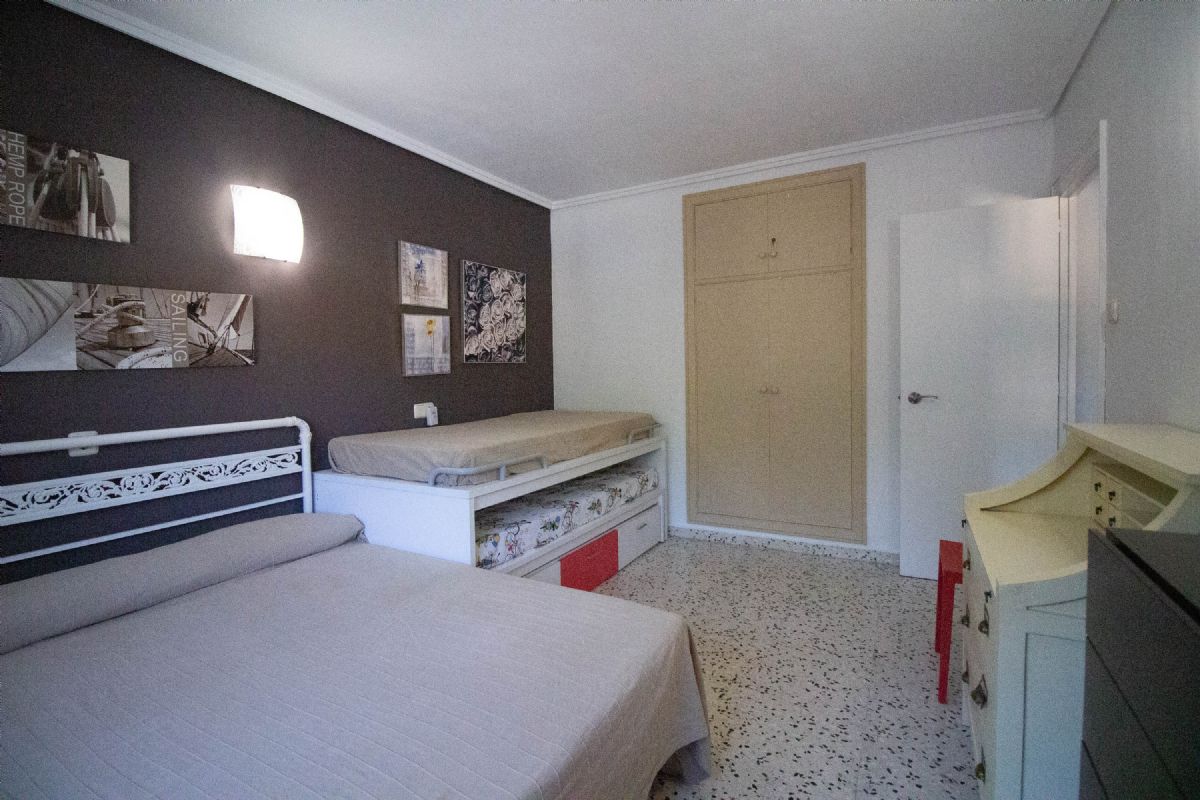 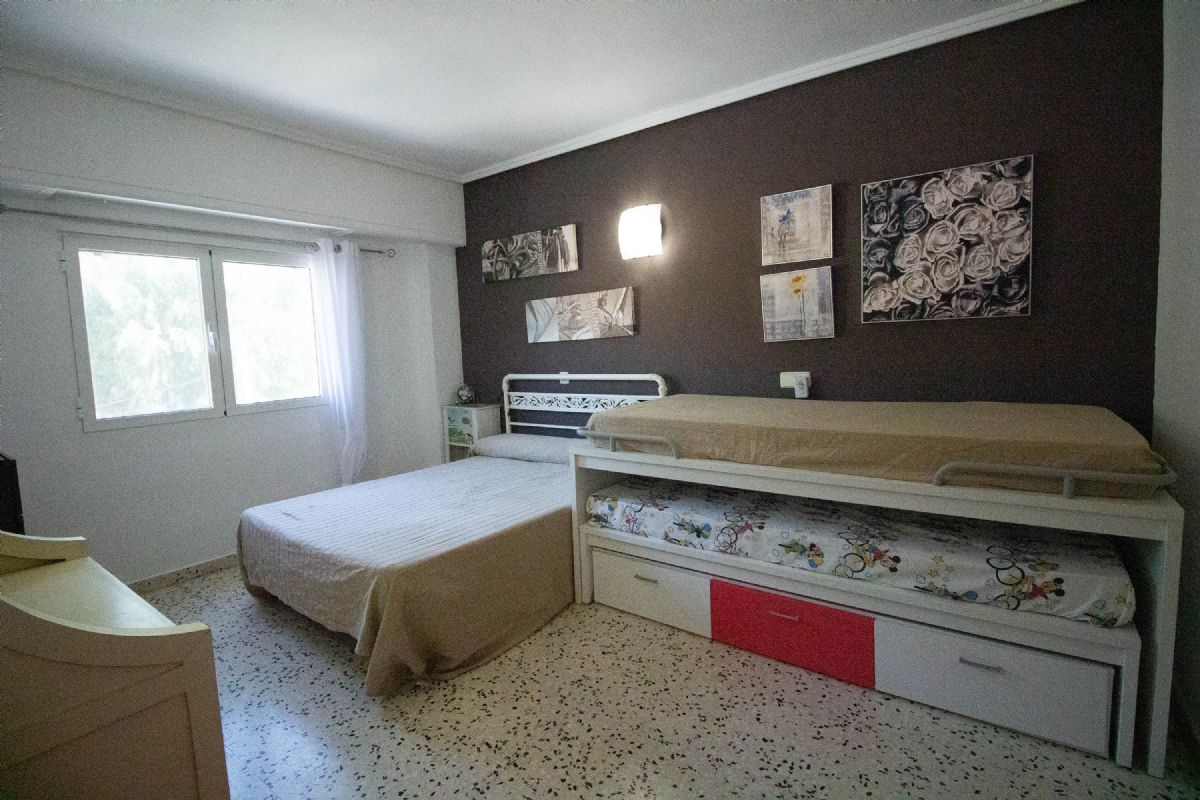 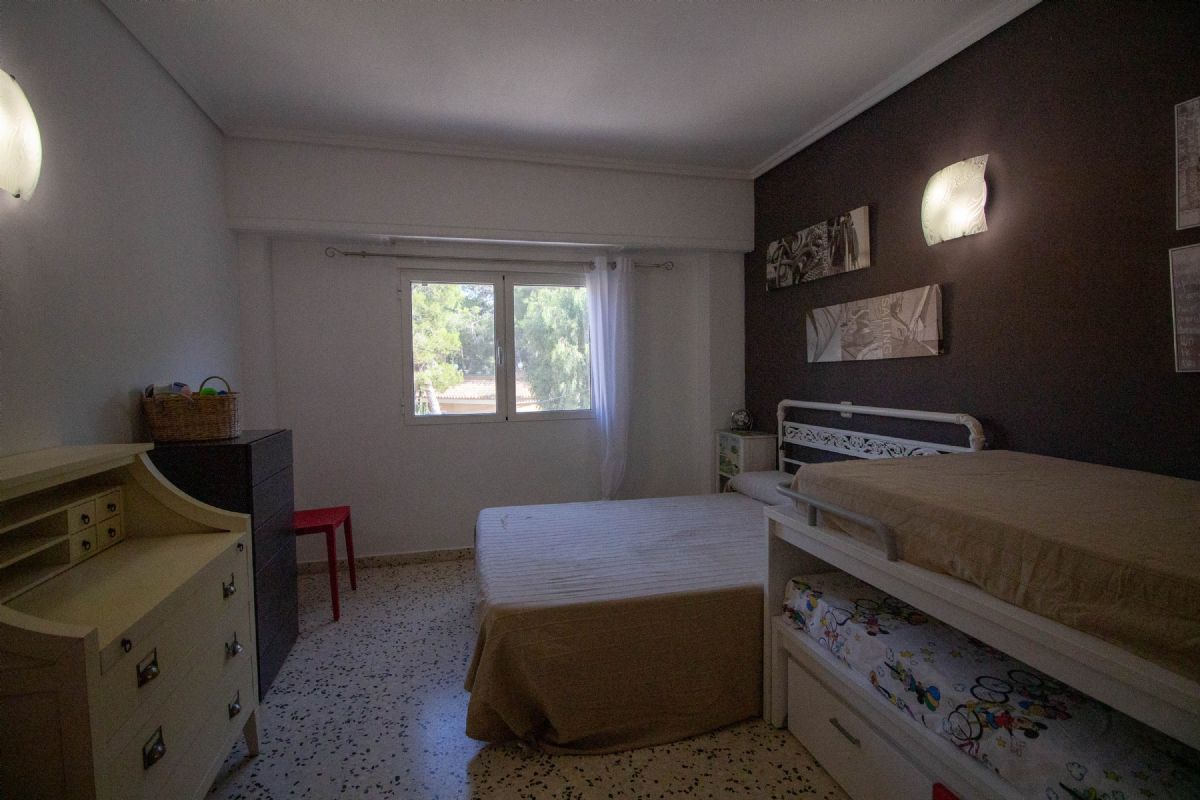 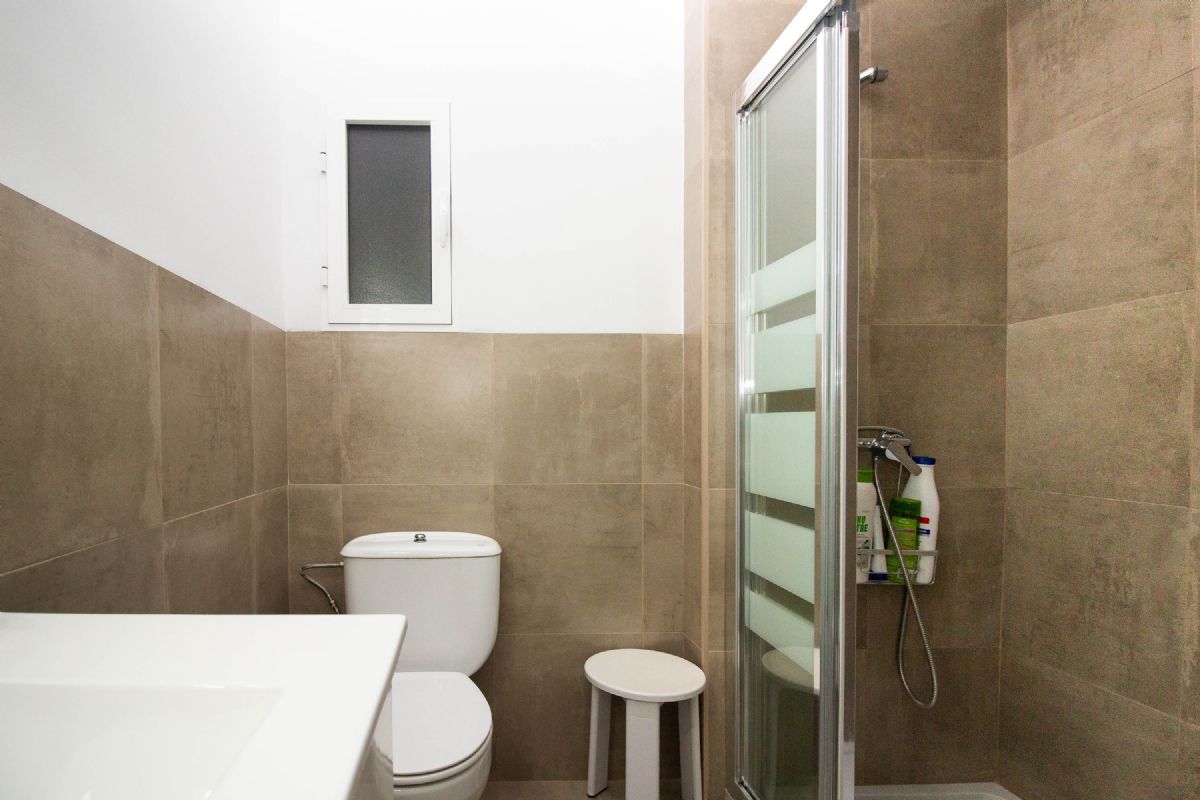 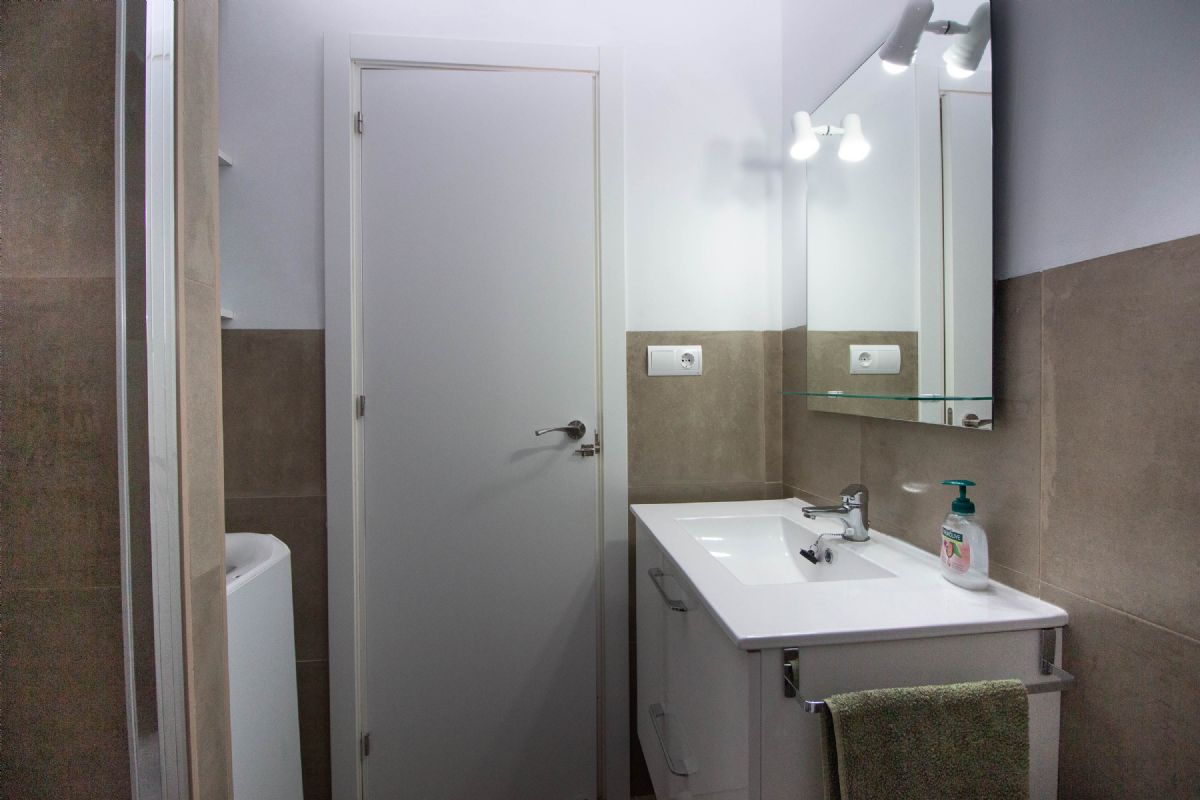 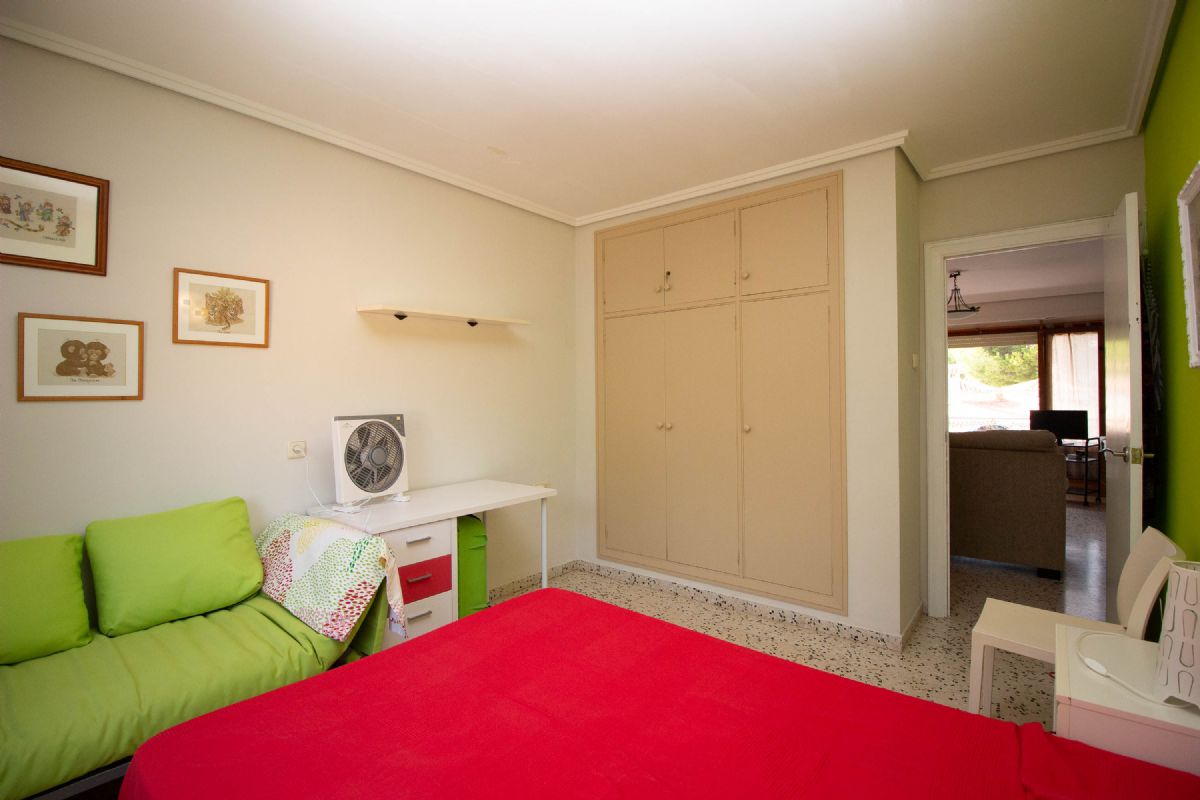 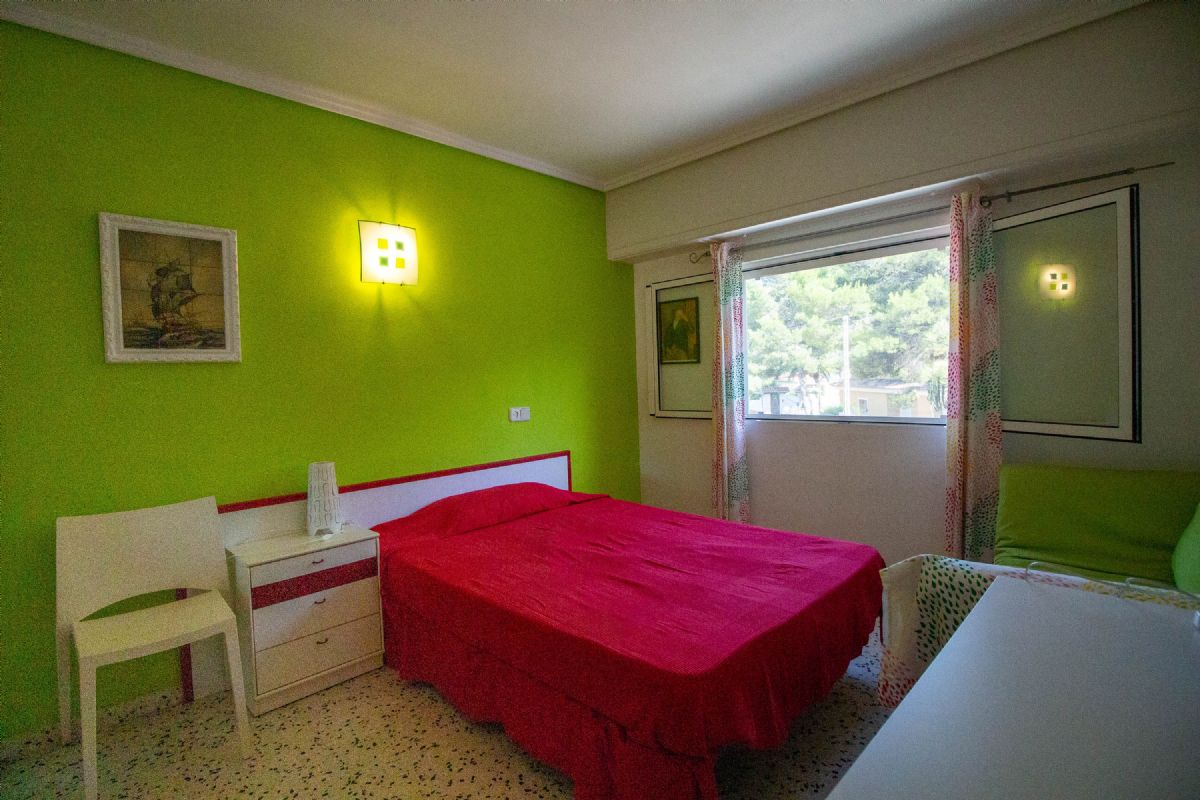 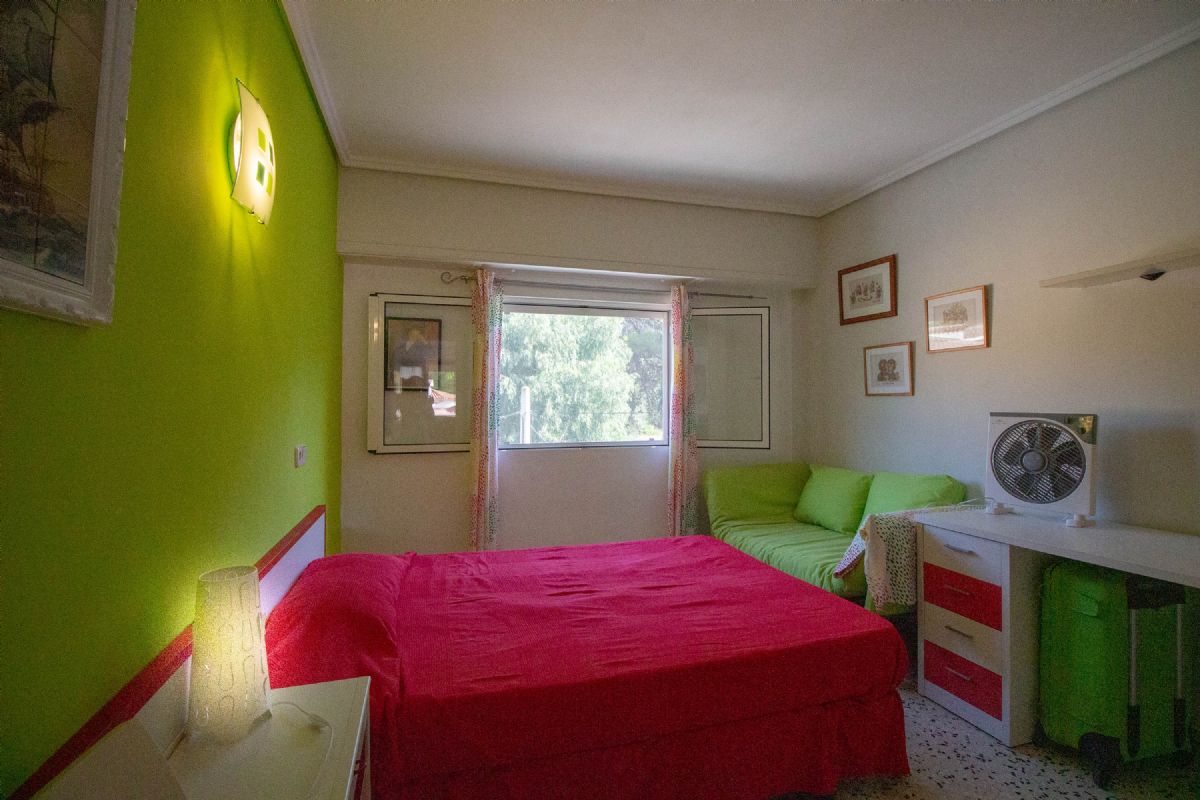 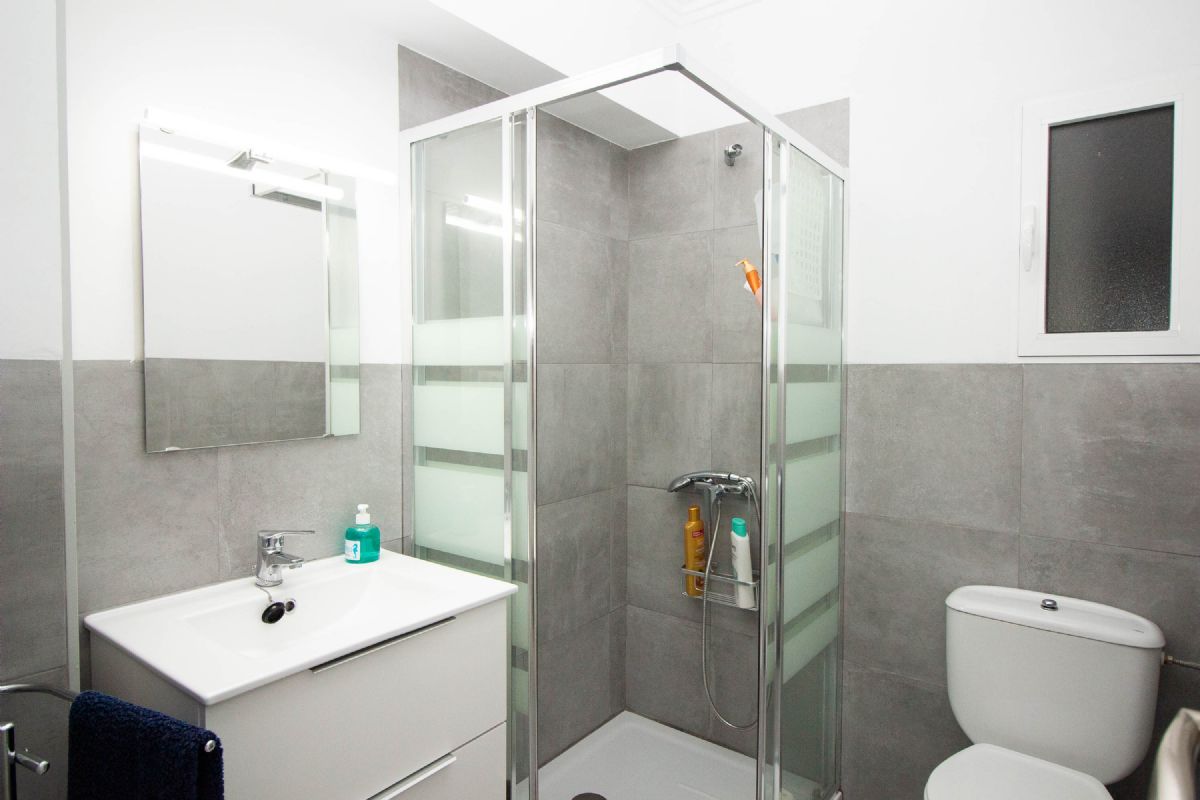 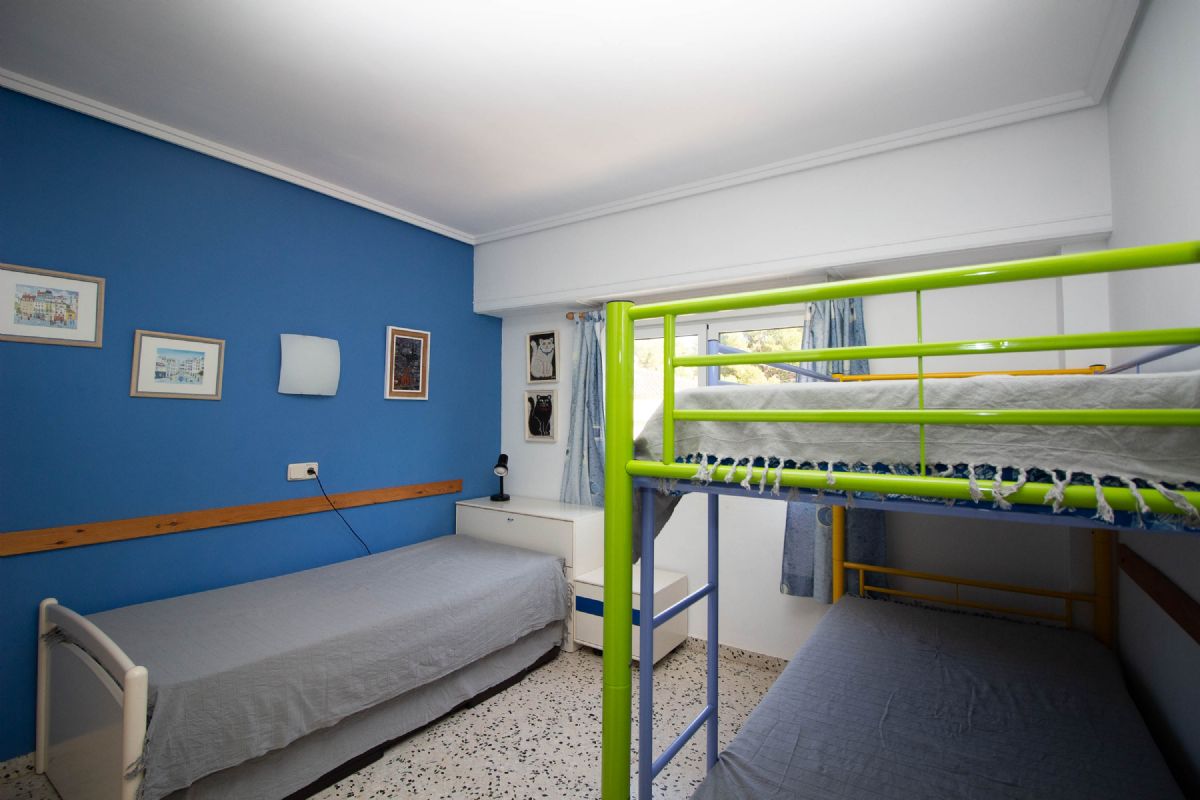 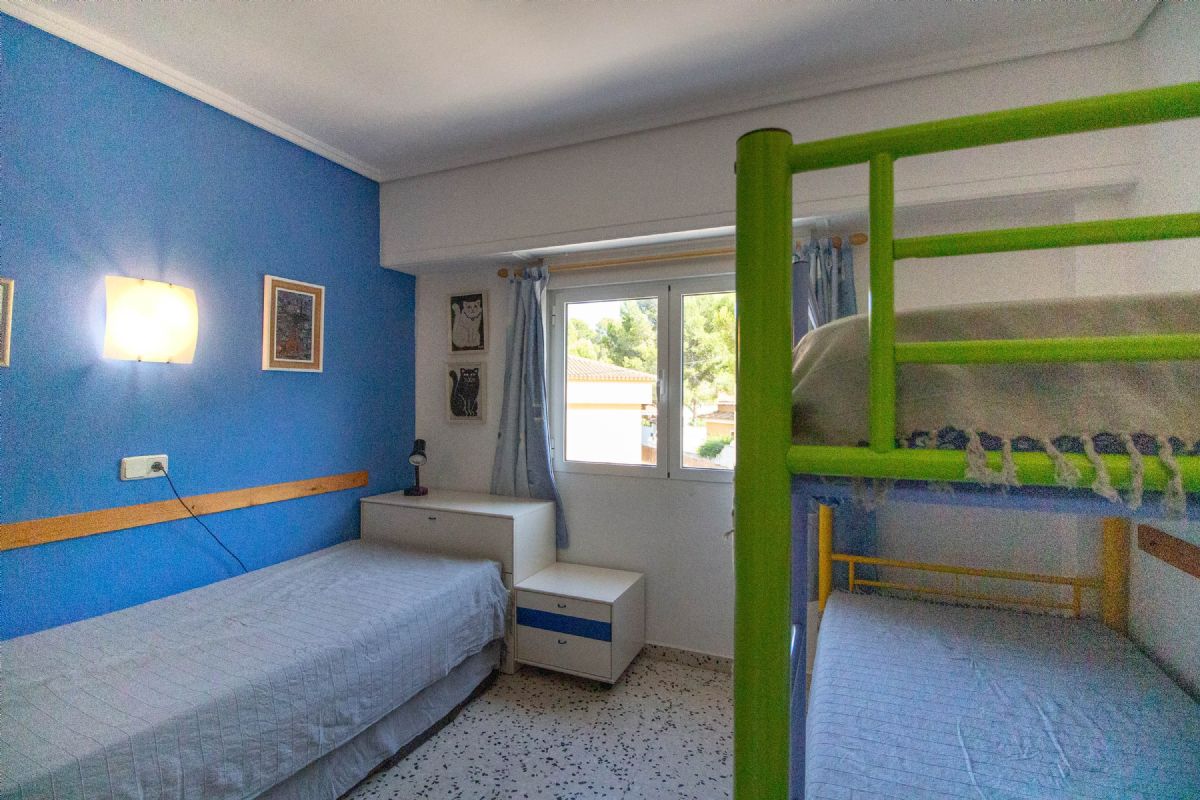 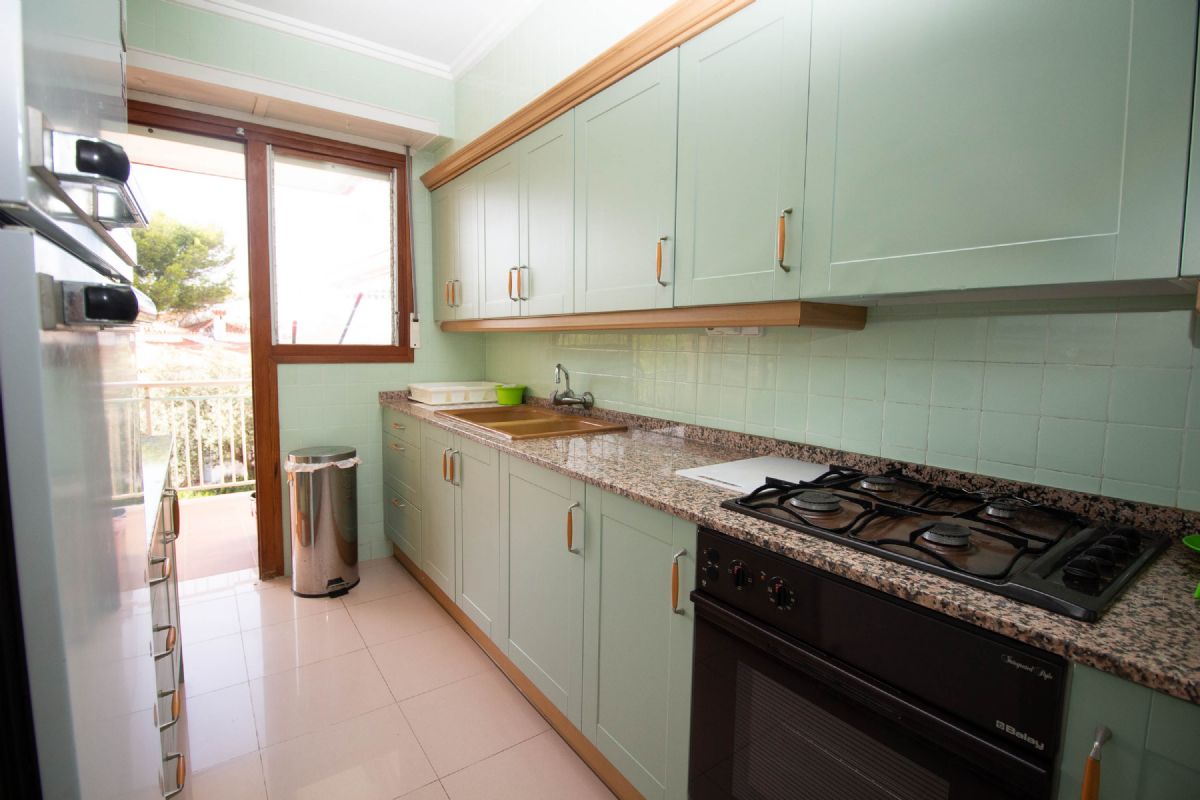 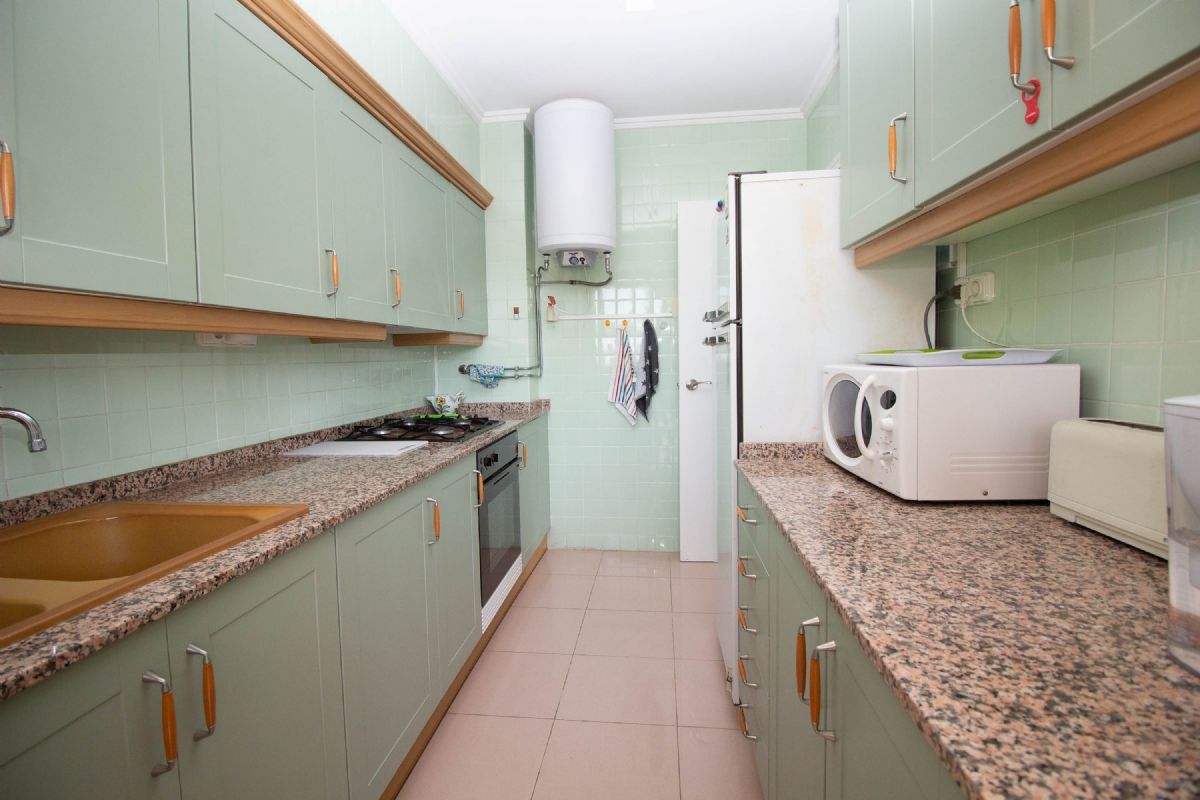 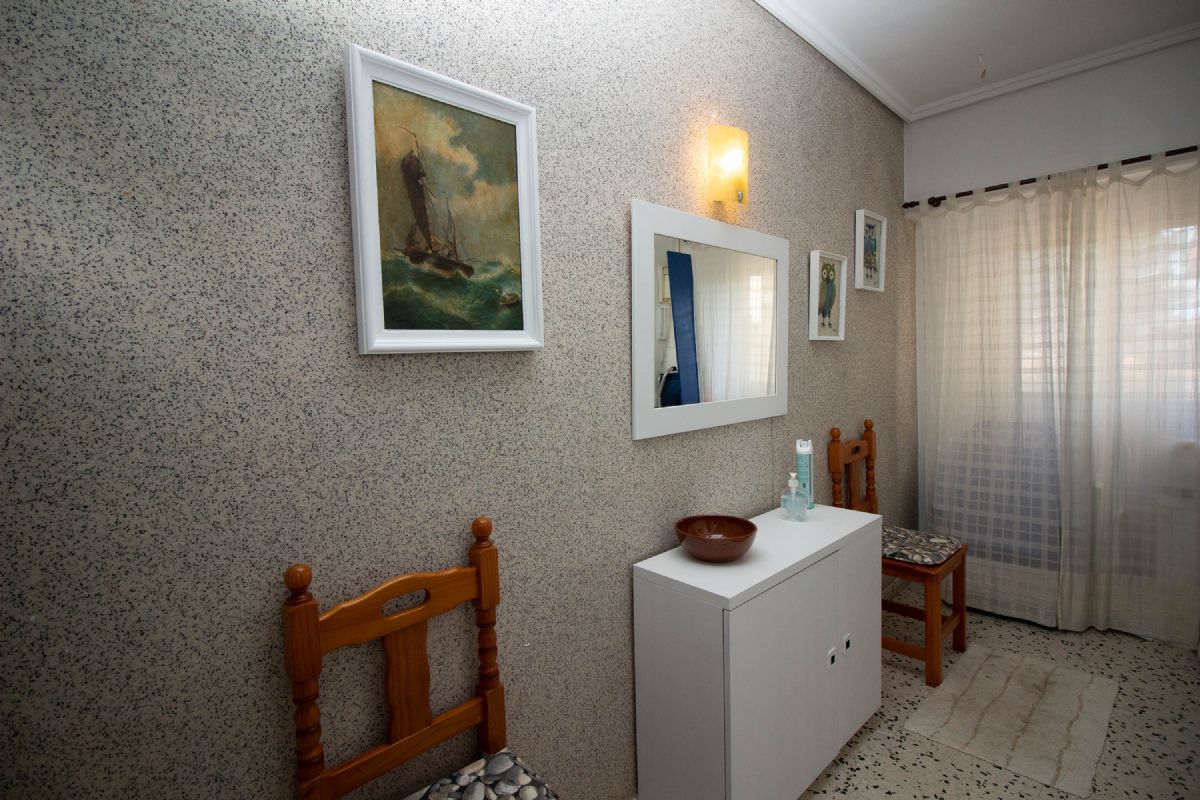 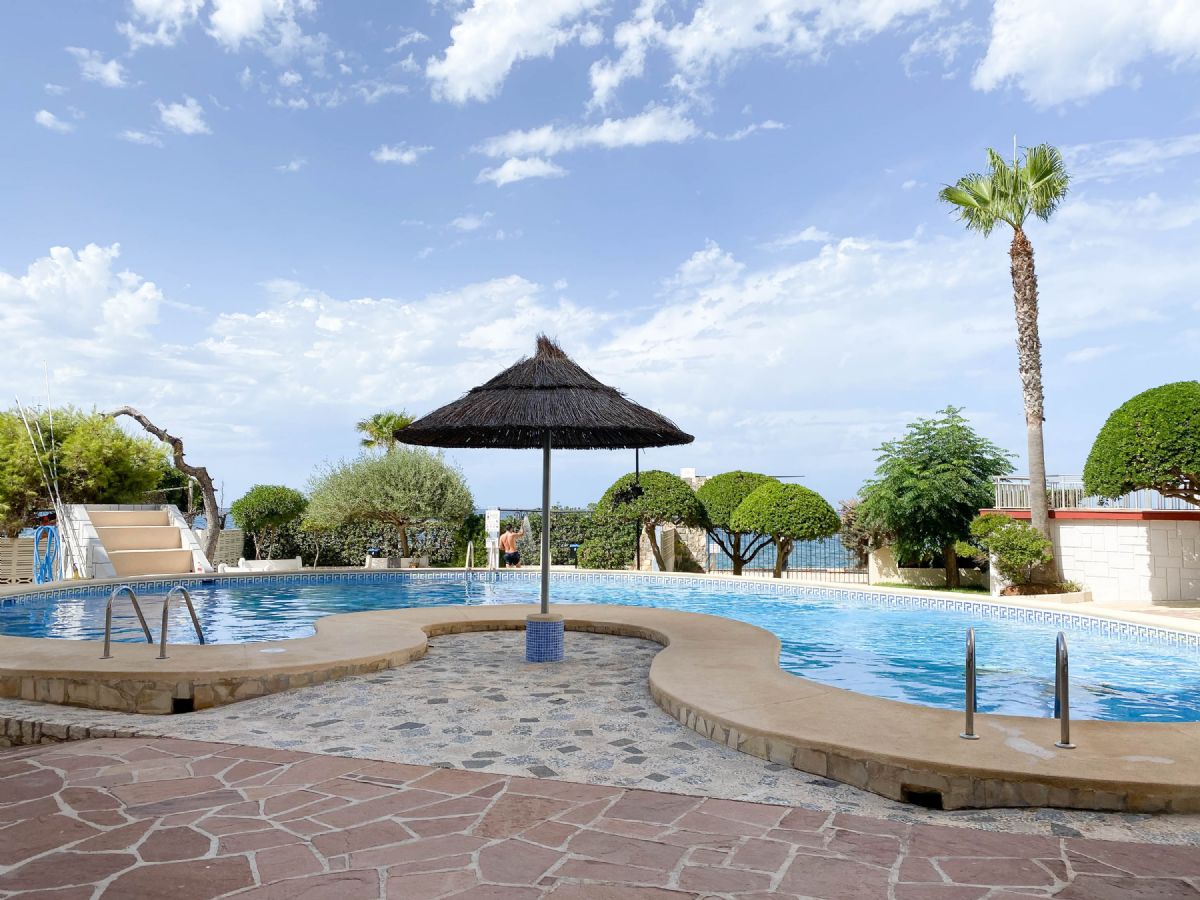 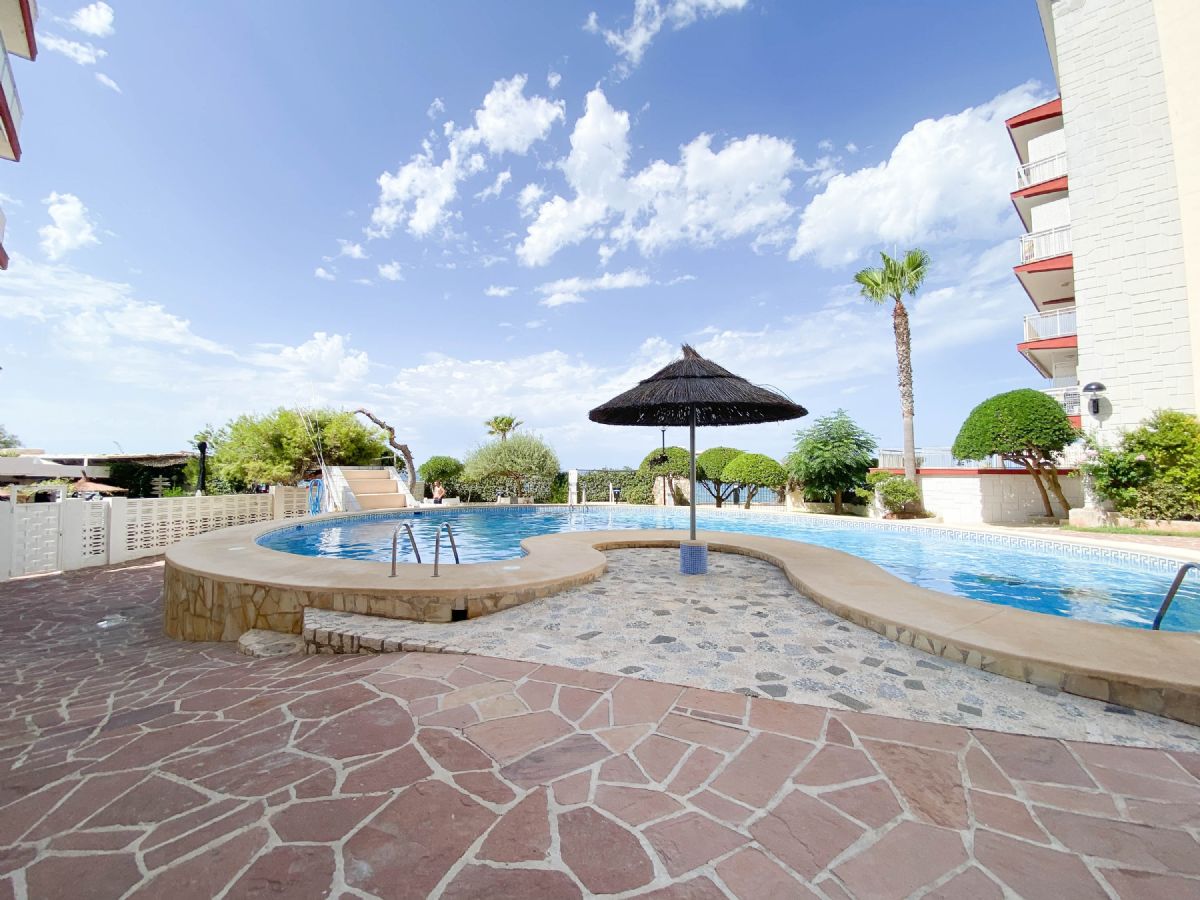 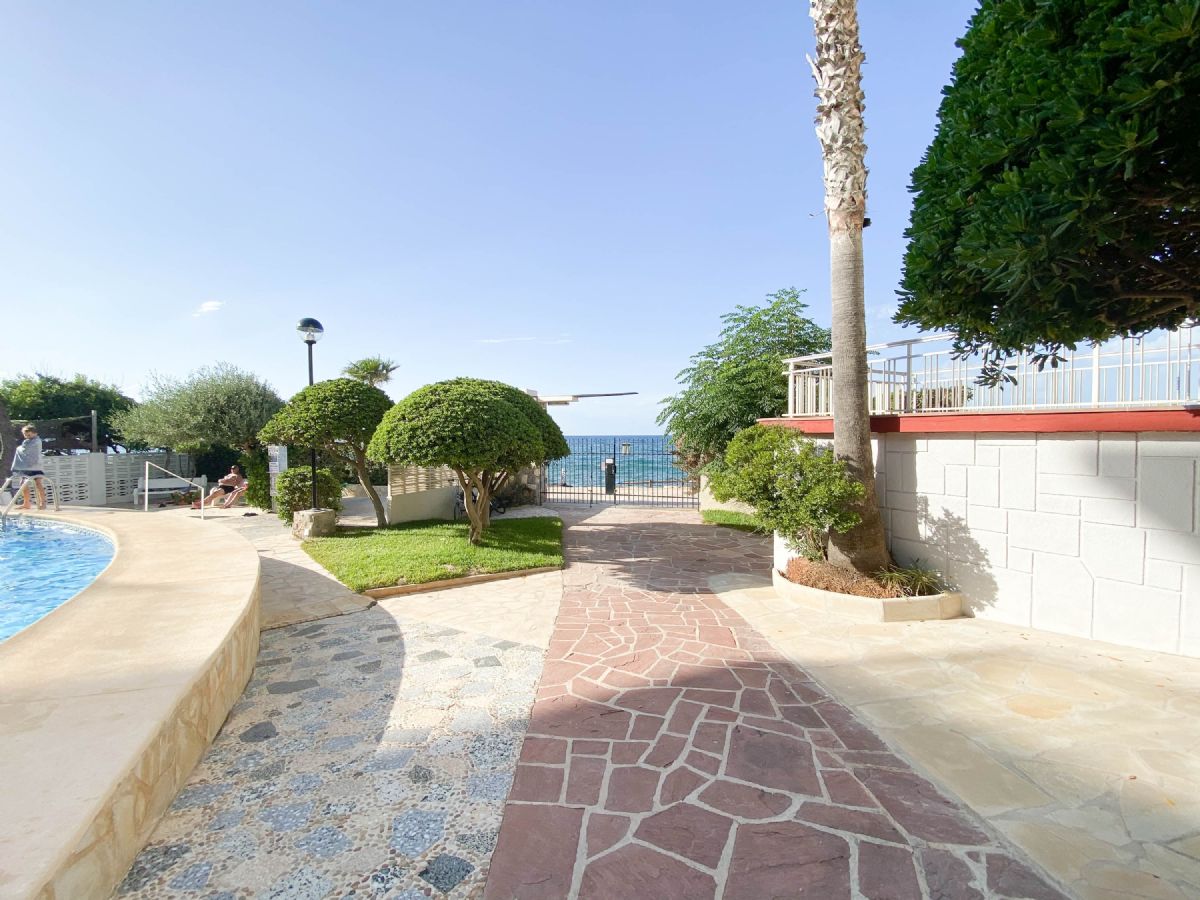 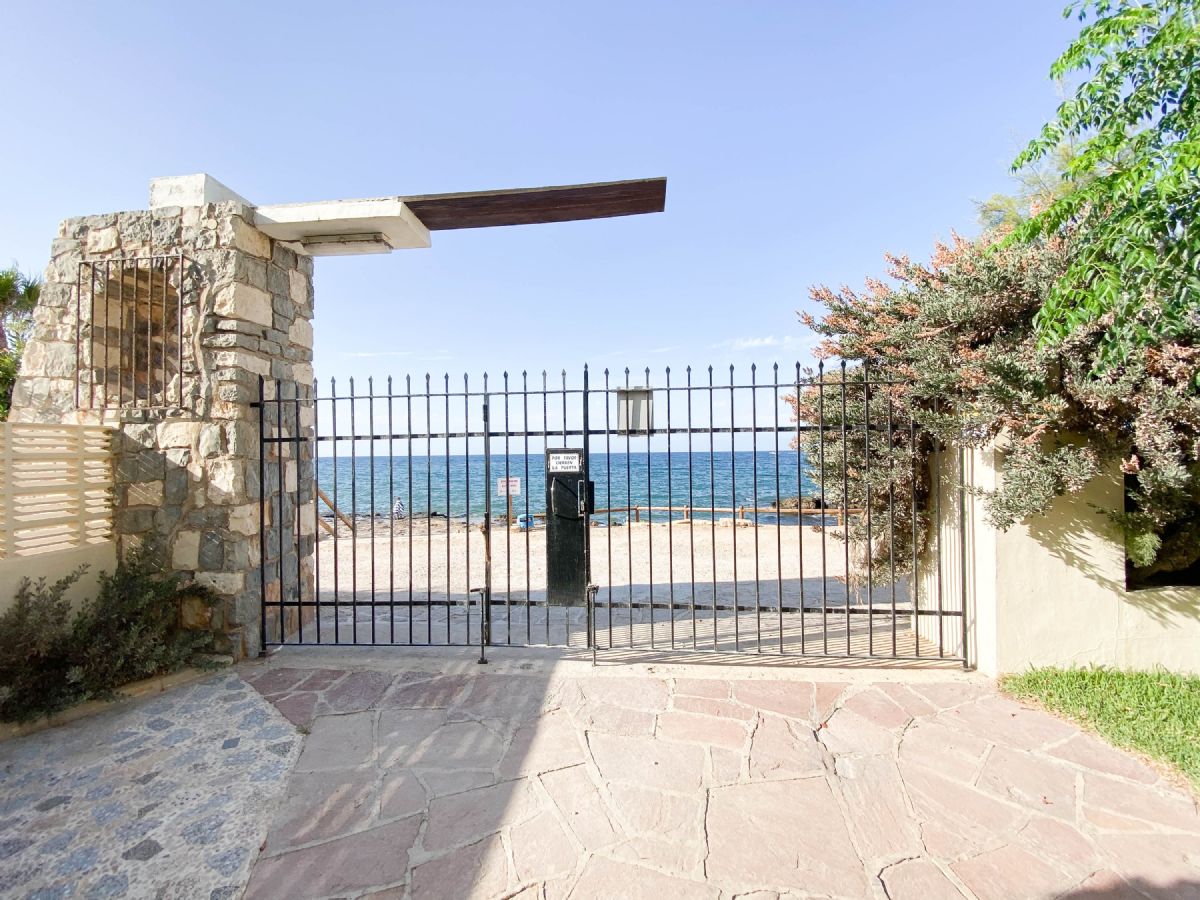 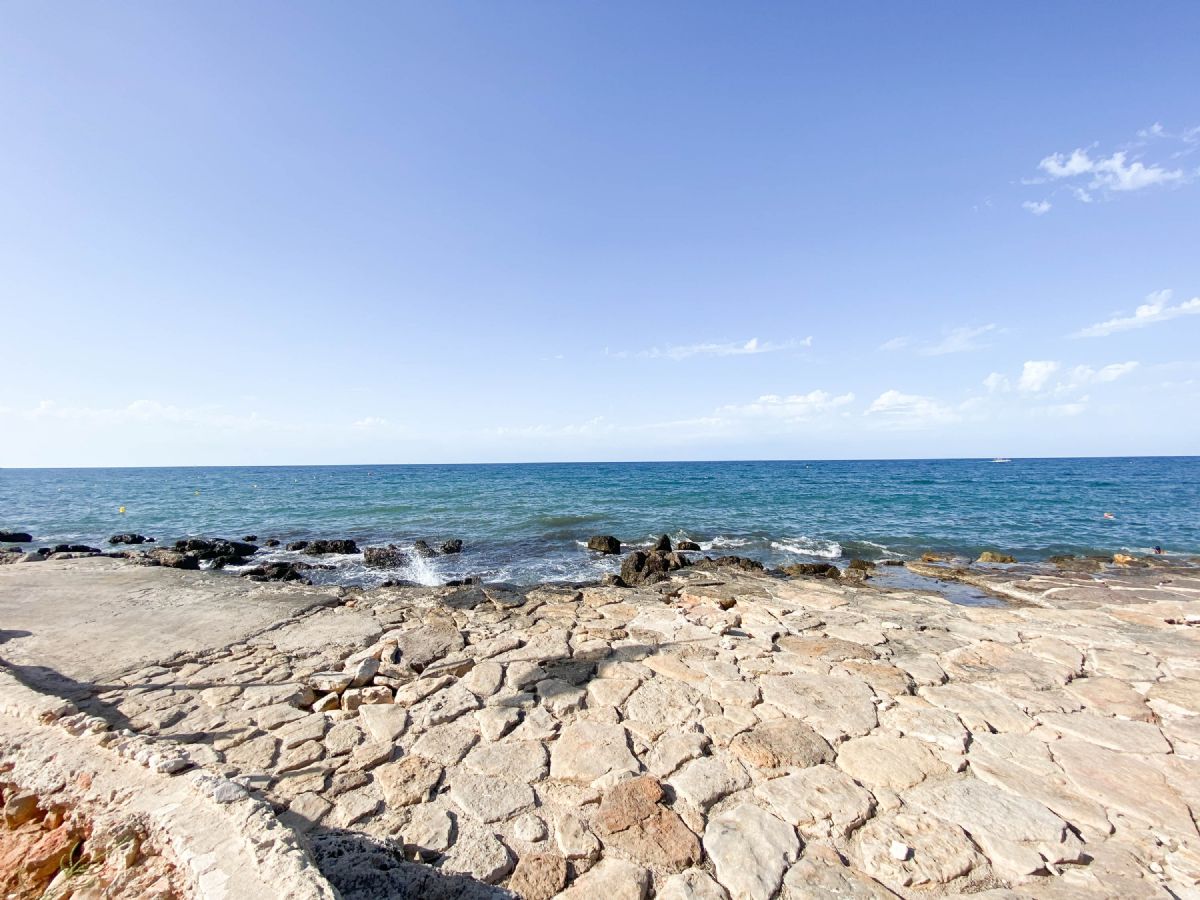 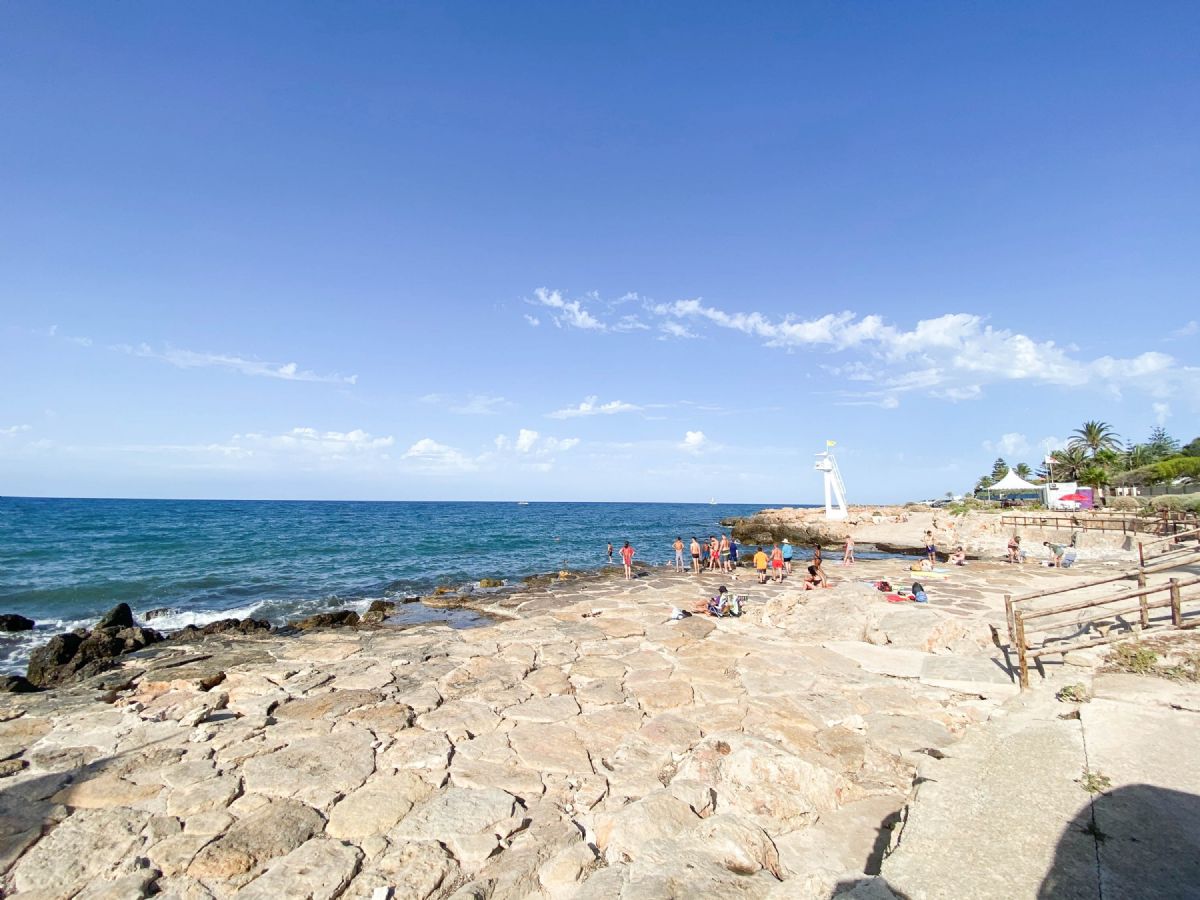 The apartment "El Trampolí" is decorated in a very cozy and functional way. It is very comfortable. It has capacity for 6 to 8 people. And it has a wonderful terrace overlooking the sea.

From the entrance there is a small corridor where you will find the bathrooms (both with shower) and a hall with two bedrooms. One of the bedrooms has a 135X190 bed and a 90x190 single bed and the other has 3 beds: one is a 90X190 bunk bed and there is also a 90X190 single bed.

Following the small corridor that bends to the right, we immediately arrive at the dining room.  The living room has large windows on two sides, which open onto the terrace, from where you can see the Sea on the right and the Montgó on the left: Sea and mountains in perfect symbiosis.

The terrace is L-shaped bordering the living room: in the central area there is a table where you can have breakfast overlooking the Mediterranean Sea or have a drink at night listening to the waves. On the other side of the terrace there is a clothesline and in the corner an armchair where there is always a very pleasant breeze.

In the apartment there is an iron, ironing board, clothes line and hairdryer. It has WIFI.

The apartment has free private parking. And the building has a swimming pool with shower service. From the pool there is direct access to the sea.

"El Trampolí" is located at Las Rotes, about 10 meters from the Sea. The beach in this area is made of rocks and has stairs to climb from the water.

In Las Rotes the bathing is very pleasant and as the beaches are rocky, diving is very common.

There is a walk along the sea that takes you to Denia in half an hour, to Punta Negra in about 15 minutes, and from there to where the road ends in 10 minutes more.

On the promenade there are restaurants where you can eat very well (typical Denia cuisine based on fish and shellfish, dried octopus and sea urchins in season) as well as having unbeatable views of the Mediterranean Sea.

The closest supermarkets are in Denia.

From Denia to the North there is a long beach called "Les Marines" which is of fine sand, has a width of 3 km and a good location (sheltered from the south and southeast winds), which makes it one of the best known of Dénia, very pleasant for both adults and children.

The center of Denia is at 3km and the Marina and Ferry Port  is at 2km.

Denia is south of Oliva and north of Jávea.

Dénia, capital of the Marina Alta. It is a cosmopolitan and modern city that offers all kinds of services. In a touristic way of talking is a destination of great interest, both for the breadth of its offers, as for the high quality of its products.

The commercial life of the city is developed around Marqués de Campo street and the other adjacent streets.

Dénia lives very involved with its sea, due to the important fishing activity, whose most significant product is the famous red shrimp, for its marinas, the largest in the province, and for its shipping industry, with the presence of a company of maritime transport, which travels to the Balearic Islands.

Another of its most characteristic elements is the Sierra del Montgó, Natural Park, which separates the boundaries between Dénia and Jávea and extends to Cape San Antonio.

The monuments of Dénia, its cultural activities and its museums, make up a rich cultural offer of high level. Among its festivities it is worth mentioning the "Festa Major" in July, with the "Bous a la mar" (declared a Festival of National Tourist Interest), and the "Float Parade" (declared a Festival of Provincial Tourist Interest), as well as the " Fallas" in March and" Moros y Cristianos "in August.

Denia is 91.5km from Alicante, 10.8km from Jávea and 105km from Valencia, and is therefore an easily accessible destination. To arrive by plane the closest airport to Denia is the Altet (Alicante), about 103.8 km away. Another important airport is Manises (Valencia), located 112.4 km from Denia.

Dénia is about 20 km. of coast, in which they emphasize their beaches: To the north, the area of Las Marinas with the beaches Punta del Raset, Les Marines, Les Bovetes, Els Molins, L'Almadrava (with area of boulders) and les Deveses.

On the south coast, the area of Las Rotas with Marineta Cassiana beach (sand) and the rocky coves of Les Rotes, of great beauty, such as El Trampolí (where the apartment is located), La Punta Negra, Les Arenetes and La Cala.

All the beaches and coves of Denia stand out for the excellent quality of its waters. Most of them wave the Blue Flag, which is a recognition of the level of quality and excellence of conservation and services that are provided on the coast of Denia: lifeguard and surveillance, hammock service, collection of waste, access for the disabled and some with parks for small children.

Among the main attractions are:

• The castle. It houses the Archaeological Museum, where you can see Roman artifacts found in the area. The Toy Museum is a trip through the toy legacy of the city, while the Ethnological Museum, located in a semi-detached house of the s. XIX, contains works that narrate local life. Nearby there is the church of the Assumption, in the Baroque style, and the portico of the town hall.

• Natural Park of Montgó. This park can be visited calmly and with a pleasant walk, it does not require great effort, its views and landscapes are excellent, both the views towards the interior, and the views when you arrive at the sea side. You can also see variety of types of birds, highly recommended.

• The fish market of Denia. nowadays, it is something that is not easy to obtain since, generally, tourists have been banned but it is a matter of trying it.

The fish arrives directly from the sea around 5pm and then: the auction begins, it is surprising and fascinating!

Throughout the province of Alicante there are many theme parks. There you can enjoy, with the smallest of the house or with friends, the animals as well as refresh in their pools.

We highlight some of them:

- Sources of the Algar. At Callosa d'en Sarria.

Miguel and his family have spent the summer in this apartment since he was little. In addition to this apartment, they bought others in the complex, where his mother and some of his sisters still come to spend the summer with their husbands and children.